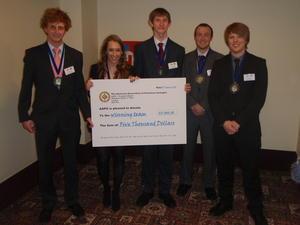 The IBA is a fantastic learning experience with the opportunity to gain a real feel of the petroleum industry and to compete against some of the most talented students around the world.

A team of five undergraduate MSci students studying at the School of Ocean and Earth Science based at the National Oceanography centre, Southampton, have been awarded gold at the 2011 American Association of Petroleum Geologists (AAPG) European section of the Imperial Barrel Awards.

The annual hydrocarbon prospect evaluation competition, predominantly entered by postgraduate-level students, is based on the analysis of an industry dataset comprising geophysical and geological data. University teams receive their dataset in early February and have five weeks to produce a detailed analysis of it prior to the event.

The Southampton team members, Peter Heath, Louise Moorhead, Nathan Payne, William Symons and Marcus Wiltshire, focused on reviewing a 600 km2site in the Netherlands. Their task was to work together to assess the potential of the area for hydrocarbon exploration and production, using the data available to them.

Considering issues such as economics and risk, the team then made recommendations about sites for potential development.

The competition is designed to mimic an industry exercise, so providing first-hand experience for competing students as to how their degree transfers to this environment.

“It was good to see that the skills we have been taught throughout our degree at Southampton can be applied so readily into an industry-based scenario. It gave us all confidence that we will be competitive in the job market once we graduate this summer,” says 4th Year MSci Geology student Marcus Wiltshire.

Up against teams from 17 other European universities, including four other British universities, the Southampton team presented their findings at the Prague finals on 19 March, and answered questions from a jury of senior oil industry experts, who judged their research to to be gold-winning.

Team Advisor Sebastian Watt comments “This is a fantastic achievement – several of the teams Southampton were competing against were Masters students specialising in Petroleum Geoscience. To gain first place against all these European universities demonstrates the outstanding quality of our students.”

This year’s award follows in a series of high scores for Southampton Earth scientists at the AAPG event. Last year, Southampton came second and third three years ago, highlighting the consistent exceptional calibre of geology and geophysics students from the University. 4th year MSci Geologist Peter Heath comments, “Our ranking this year is a testament to the quality of teaching at the School of Ocean and Earth Science – we are honoured to compete for our University.”

The 2011 team’s success has secured a $5000 AAPG donation to the University, which will be used to further petroleum geosciences education.

The Southampton team now look forward to a trip to the United States for the finals, which are held on 8–11 April, where the they will be making the same presentation and representing Europe among 12 universities worldwide.

Reflecting on the experience, Geophysics student Louise Moorhead says “The IBA is a fantastic learning experience with the opportunity to gain a real feel of the petroleum industry and to compete against some of the most talented students around the world. I would definitely recommend it to other students as it is a great way to see how the theory we have learnt is put into practice in oil and gas companies.”