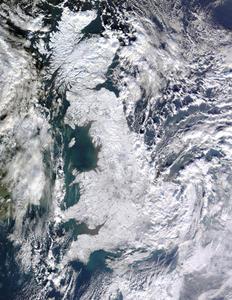 Weather forecasters have a tougher job predicting winter conditions over Europe in some years over others, concludes a new study carried out by the National Oceanography Centre.

The study revealed that the relationship between our winter weather and the strength of the airflow coming in from the Atlantic – one of the factors used by forecasters to predict the weather – is stronger in some years than others. The results were recently published in the Royal Meteorological Society publication Weather.

Co-authors Drs Joël Hirschi and Bablu Sinha from the National Oceanography Centre explain “There are two major atmospheric pressure systems centred around Iceland and the Azores that are very influential for the weather in Europe. Air flows between these two systems, bringing mild air from the North Atlantic to Europe. The pressure difference between the two pressure systems – and the corresponding airflow – fluctuates and scientists call this phenomenon the ‘North Atlantic Oscillation’, or NAO, which is by convention positive when the pressure difference is a stronger than average and negative when it is weaker than average.

“When there is more air coming from the Atlantic, we get milder, wetter winters, as in 2007 and 2008. And when the airflow is weaker, our weather is influenced by air masses from Siberia and the Arctic, bringing colder and drier conditions.”

“It’s like a guitar string,” says Dr Hirschi. “When there is tension in the string, it stays straight. If you slacken the tension enough, the string goes wobbly.

“So when we have a vigorous airflow driven by a large pressure difference, it tends to stay straight and the weather is easy to define. When weaker, the airflow meanders, leading to more complicated weather patterns. You get big differences in weather over Europe, switching between cold Arctic/Siberian air masses, and milder subtropical air masses. This is why in December 2010, the UK suffered from low temperatures and heavy snowfall, while other European regions such as the Balkans experienced warm and wet conditions.”

In this study, the researchers looked at the strength of the NAO during each year between 1880 and 2009 and compared this with observations of winter weather conditions over the same period.