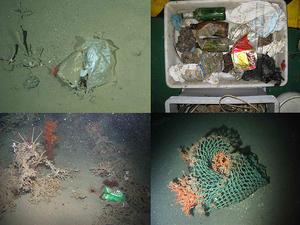 The National Oceanography Centre has been involved in a major new survey of the seafloor that has found that even in the deepest ocean depths you can find bottles, plastic bags, fishing nets and other types of human litter.

The litter was found throughout the Mediterranean, and all the way from the continental shelf of Europe to the Mid-Atlantic Ridge 2,000 kilometres from land. Litter is a problem in the marine environment as it can be mistaken for food and eaten by some animals or can entangle coral and fish – a process known as “ghost fishing”.

The international study involving 15 organisations across Europe, was led by the University of the Azores, and is a collaboration between the Mapping the Deep Project led by Plymouth University and the European Union-funded HERMIONE Project, coordinated by the National Oceanography Centre. Other UK project partners that contributed to the study are the University of Southampton and the British Geological Survey.

Scientists took nearly 600 samples from across the Atlantic and Arctic Oceans and in the Mediterranean Sea, from depths ranging from 35 metres to 4.5 kilometres.

Mr Christopher Pham, from the University of the Azores said “We found that plastic was the most common litter item found on the seafloor, while trash associated with fishing activities (discarded fishing lines and nets) was particularly common on seamounts, banks, mounds and ocean ridges. The most dense accumulations of litter were found in deep underwater canyons.”

Dr Kerry Howell, Associate Professor at Plymouth University’s Marine Institute said “This survey has shown that human litter is present in all marine habitats, from beaches to the most remote, and deepest parts of the oceans. Most of the deep sea remains unexplored by humans and these are our first visits to many of these sites, but we were shocked to find that our rubbish has got there before us.”

Litter was located at each site surveyed, with plastic accounting for 41% and derelict fishing gear 34%. Glass and metal, wood, paper/cardboard, clothing, pottery, and unidentified materials were also observed.

Dr Eva Ramirez-Llodra, Marine Biologist from the HERMIONE project said “An interesting discovery was relating to deposits of clinker on the sea floor – this is the residue of burnt coal that had been dumped by steam ships from the late 18th century onwards. We have known clinker occurs on the deep-sea bed for some time, but what we found was the accumulation of clinker is closely related with modern shipping routes, indicating that the main shipping corridors have not been altered in the last two centuries.”

The report outlines the path that plastics in particular can take, originating from coastal and land sources, and being carried along continental shelves and slopes into deep water.

Dr Veerle Huvenne, Seafloor and Habitat Mapping Team Leader at the National Oceanography Centre, Southampton, explains: “Submarine canyons form the main connection between shallow coastal waters and the deep sea. Canyons that are located close to major coastal towns and cities, such as the Lisbon Canyon offshore Portugal, or the Blanes Canyon offshore Barcelona, can funnel litter straight to water depths of 4500m or more.”

Dr Howell added “The large quantity of litter reaching the deep ocean floor is a major issue worldwide. Our results highlight the extent of the problem and the need for action to prevent increasing accumulation of litter in marine environments.”

The paper, Marine litter distribution and density in European Seas, from the shelves to deep basins, is published in the journal PLOS ONE http://dx.plos.org/10.1371/journal.pone.0095839.