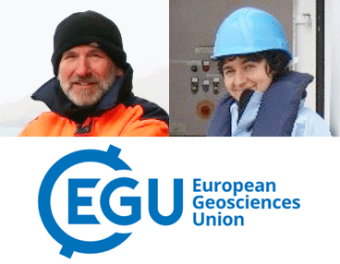 We are fantastically proud of Marilena and Richard’s achievements and thrilled to see them both recognised for their significant contribution to ocean science.

Two NOC scientists are to receive awards from The European Geosciences Union (EGU) it was announced this week.

These individuals are honoured for their important contributions to the Earth, planetary and space sciences and will be celebrated during the EGU General Assembly 2021, held in April next year.

Prof Richard Lampitt will receive the Fridtjof Nansen Medal, established by the Ocean Sciences Division in recognition of the scientific achievements of Fridtjof Nansen. It is awarded for distinguished research in oceanography.

Prof Lampitt commented, “I am extremely grateful to the friends and colleagues who have put me forward for this and to the EGU panel for awarding it. I am particularly touched to be associated in this way with Fridtjof Nansen who I have admired for many years as a man of determination, vision, enquiry and empathy. I even used a Nansen water bottle in one of my first expeditions to sea”

Dr Oltmanns commented, “I feel honoured to be considered worthy of this award and grateful to my colleagues. They are supporting me in my work every day and they all contribute to a better understanding of the ocean and how we depend on it in many different ways.”

NOC Chief Scientist and Director of Science and Technology, Prof Angela Hatton added, “We are fantastically proud of Marilena and Richard’s achievements and thrilled to see them both recognised for their significant contribution to ocean science.”