Efficient phosphorus use by phytoplankton 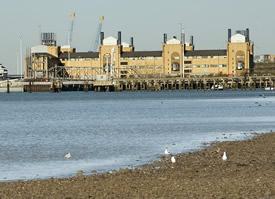 We are interested in the adaptations of phytoplankton living in regions where nutrients are in short supply.

Rapid turnover and remodelling of lipid membranes could help phytoplankton cope with nutrient scarcity in the open ocean.

A team led by Patrick Martin of the University of Southampton's School of Ocean and Earth Science based at the National Oceanography Centre has shown that a species of planktonic marine alga can rapidly change the chemical composition of its cell membranes in response to changes in nutrient supply. The findings indicate that the process may be important for nutrient cycling and the population dynamics of phytoplankton in the open ocean.

Tiny free-floating algae called phytoplankton exist in vast numbers in the upper ocean. Through the process of photosynthesis, they use the energy of sunlight to produce organic compounds required for growth, which draws large amounts of carbon dioxide down from the atmosphere. However, they also need other nutrients such as phosphorus, which is chronically scarce in many oceanic regions.

“We are interested in the adaptations of phytoplankton living in regions where nutrients are in short supply,” explained Patrick Martin.

Under normal growth conditions, the cell membranes of phytoplankton contain phosphorus-based lipids called phospholipids. However, it has been appreciated for some time that phytoplankton can exchange their membrane phospholipids with non-phosphorus lipids when phosphorus is in short supply. This substitution saves the cells some phosphorus, which can then be used for other important growth processes such as making new DNA.

“Until now, it has been unclear how rapidly phytoplankton cells are able to change the phosphorus composition of their membranes, and hence whether this process is important over the life-time of individual cells” said Patrick Martin.

To address the issue, he and his collaborators from Woods Hole Oceanographic Institution (WHOI) in the United States performed growth experiments with a species called Thalassiosira pseudonana, which biologists use as a model species representative of a very important group of phytoplankton called diatoms.

“Our research now shows that this substitution, at least in the alga we studied, can take place within 24 hours, and is clearly a physiological response by individual cells to the phosphorus concentration in their environment – as opposed to a longer-term adjustment over successive generations,” said Patrick Martin.

The researchers also show that when cells have ample phosphorus, their phospholipids contain a surprisingly large amount of phosphorus. Therefore, if these cells suddenly encounter low phosphorus conditions, they have quite a substantial phosphorus reserve in their lipids, which might be significant for supporting further growth.

“Phosphorus concentrations in the ocean can be locally enhanced by physical features such as eddies in the water, and rapid remodelling of lipid membranes might allow phytoplankton to exploit such conditions,” said Patrick Martin.

This research was funded by the United States’ National Science Foundation and by the Graduate School of the NOC in Southampton.