Ecological change in the abyss – the Amperima Event 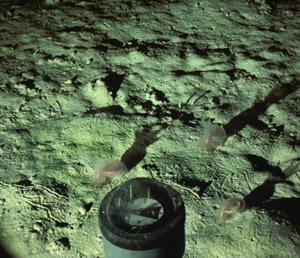 Even in the dark abyss of the deep ocean animal communities can undergo rapid, widespread and radical changes. Scientists at the National Oceanography Centre are at the forefront of monitoring these changes and understanding the mechanisms responsible. Their latest research is published in a special issue of the journal Deep Sea Research II.

We often think of the deep ocean floor as stable, relatively unvarying environment untroubled by surface climate conditions. But long-term monitoring has shown that animal communities living at great depth on the seafloor can change radically over remarkably short periods, and that these events are ultimately driven by climate.

Such faunal changes are exemplified by the ‘Amperima Event’ – the sudden mass occurrence of the sea cucumber (holothurian) Amperima rosea recorded on the Porcupine Abyssal Plain (PAP) situated off the southwest coast of Ireland in the northeast Atlantic. Communities of animals living on the seabed there at depths of nearly 5000 metres have been monitored from 1989 to the present day.

A major change occurred in the PAP community between 1996 and 1999 involving a number of animal groups, including sea anemones, segmented worms, sea spiders, sea squirts, brittle stars, and sea cucumbers, all of which increased in abundance.

However, the population explosion in the sea cucumber Amperima rosea (hereafter Amperima) was particularly striking – thus the ‘Amperima Event’. Before 1996 the sea cucumber was found in only ones or twos. They were very rare. But by 1999, the sea cucumber reached such high densities that if you were able to walk on the deep seafloor, you would have difficulty in avoiding squashing them flat.

Dr David Billet and his colleagues showed that the increase abundance and dominance of Amperima occurred over a very wide area, greater than the size of the UK. Changes are also apparent in the abundance of other animals living in the seabed, including the single-celled creatures inhabiting the sediments. The whole deep-sea world had been turned on its head.

“What this strongly suggested,” says Dr Billett, “is that the ‘Amperima Event’ did not simply reflect localised, chance changes in the abundances of one or two species. Instead, changes in the whole deep-sea animal community were driven by environmental factors.”

The animals living on the deep seafloor feed on organic matter in the form of phytodetritus – the remains of tiny marine plants that once lived in the sunlit surface layer – and which fall down through the water column and settle on the seabed. It seemed possible that an increase in the amount of this ‘marine snow’ might have driven the ‘Amperima Event’.

From sediment trap measurements, a team led by Professor Richard Lampitt of the National Oceanography Centre has subsequently shown that variations in the supply of organic matter to the PAP can vary greatly between years. Indeed, a second sudden mass occurrence ofAmperima in 2001 – a possible second ‘Amperima Event’ – may have been due to increased food availability.

Food quality may also be important. Dr Denise Smythe-Wright, also of the National Oceanography Centre and her colleagues have shown that the composition and potential nutrient quality of organic matter exported from the surface ocean depend on the species composition of the ocean phytoplankton community. This could favour the reproduction, recruitment and competitive ability of particular species.

For example, Amperima has a different requirement for certain carotenoid pigments than other species of sea cucumber. Carotenoids in shallow water are known to improve egg production and improve the chances of larvae in developing into juveniles. Carotenoids are used as feed in aquaculture to improve yields. In the food-limited deep sea, changes in the quantity and quality of the downward flux of carotenoids with season and year may change the egg production in certain species allowing the rapid colonisation of large areas of the seafloor when the conditions are right.

“Whether it is the quality or the quality of the organic matter, or both, that matter,” says Dr Billett, “it appears that changes in the density of animals such as Amperima are related to phytoplankton productivity in the overlying surface waters, which is affected by climate change.”

“Moreover”, he says, “we know from the fossil record that deep-sea animal communities change over geological timescales. Knowing how species density and dominance change in relation to environmental variables in the present will help in interpreting the geological record and will allow predictions of how deep-sea fauna might alter in relation to climate change.