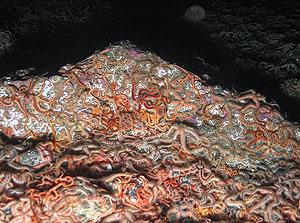 Climate models must take this carbon sink into account.

The impact on levels of carbon dioxide in the Earth’s atmosphere by the decaying remains of a group of marine creatures that includes starfish and sea urchin has been significantly underestimated, conclude scientists.

“Climate models must take this carbon sink into account,” says Mario Lebrato, lead author of the study. The work was done when he was at the National Oceanography Centre, Southampton (NOCS) and affiliated with the University of Southampton’s School of Ocean and Earth Science (SOES); he is now at the Leibniz Institute of Marine Science in Germany.

Globally, the seabed habitats occupy more than 300 million million square metres, from the intertidal flats and pools to the mightiest deep-sea trenches at 11,000 metres. The benthos – the animals living on and in the sediments – populate this vast ecosystem.

Calcifying organisms incorporate carbon directly from the seawater into their skeletons in the form of inorganic minerals such as calcium carbonate. This means that their bodies contain a substantial amount of inorganic carbon. When they die and sink, some of the inorganic carbon is remineralised, and much of it becomes buried in sediments, where it remains locked up indefinitely.

Lebrato and his colleagues provide the first estimation of the contributions of starfish, sea urchins, brittle stars, sea cucumbers and sea lilies – all kinds of echinoderm – to the calcium carbonate budget at the seabed. They estimate that the global production from all echinoderms is over a tenth (0.1) of a gigatonne of carbon per year – that is, more than a hundred thousand million kilograms.

This is less than the total biological production in the main water column, or pelagic zone, which scientists believe to be between around 0.6 and 1.8 gigatonnes of carbon per year. But echinoderms apparently deliver more carbon to the sediments than do forams, for example. These microscopic animals live in vast numbers in the oceans and are traditionally regarded along with coccolithophores (single-celled marine plants surrounded by calcium carbonate plates) as one of the biggest contributors to the flux of calcium carbonate from the sunlit surface waters to the ocean’s interior – the so-called ‘biological carbon pump’.

“Our research highlights the poor understanding of large-scale carbon processes associated with calcifying animals such as echinoderms and tackles some of the uncertainties in the oceanic calcium carbonate budget,” says Lebrato. “The realisation that these creatures represent such a significant part of the ocean carbon sink needs to be taken into account in computer models of the biological pump and its effect on global climate.”

There is a worry that ocean acidification due to increased carbon dioxide emissions from the burning of fossil fuels could reduce the amount of calcium carbonate incorporated into the skeletons of echinoderms and other calcifying organisms.

However, different echinoderm species respond to ocean acidification in different ways, and the effects of rising temperatures can be as significant as those of rising carbon dioxide. How this will affect the global carbon sink remains to be established.

Lebrato concludes “The scientific community needs to reconsider the role of benthic processes in the marine calcium carbonate cycle. This is a crucial but understudied compartment of the global marine carbon cycle, which has been of key importance throughout Earth history and it is still at present.”