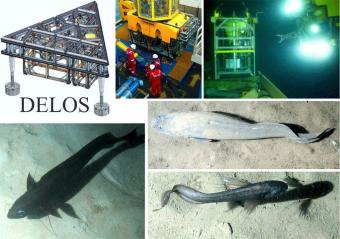 Learning anything about the behaviour of deep-sea fish is difficult, but thanks to a major investment in long-term, deep-ocean observation by industry we now know more.

The first documented seasonal migrations of fish across the deep-sea floor has been revealed in research published today, involving NOC authors.

NOC scientist Dr Daniel Jones, co-author of the article, said: “Learning anything about the behaviour of deep-sea fish is difficult, but thanks to a major investment in long-term, deep-ocean observation by industry we now know more.”

Eleven years ago, two sophisticated deep-sea floor observatories were installed at a depth of 1400 metres in an oil field off the coast of Angola. Results from the observatories, published today in the Journal of Animal Ecology, suggest that the local fish population may migrate seasonally in response to seasonal patterns in surface-ocean productivity.

Lead scientist Dr Rosanna Milligan, Nova Southeastern University, who started the work while at the University of Glasgow, said: “We are extremely excited about our findings, which demonstrate a previously unobserved level of dynamism in fish living on the deep-sea floor, potentially mirroring the great migrations which are so well characterised in animal systems on land.”

“The work really adds to our understanding of movement patterns in deep-sea fish and suggests reasons for their behaviours. Because we were able to link the abundances of fish observed at the seafloor to satellite-derived estimates of primary productivity, our results suggest that even top-level predators and scavengers in the deep oceans could be affected by changes filtering down from the surface of the ocean”.

This work was only possible as a result of a major international collaboration between industry, academia and government, involving more than ten organisations across Angola, UK and US.

This research forms part of the “Deep-ocean Environmental Long-term Observatory System” (DELOS) project, which drew on specialist technical and scientific expertise from the UK (the National Oceanography Centre, and the Universities of Aberdeen and Glasgow) and the US (Monterey Bay Aquarium Research Institute, and Texas A&M, Rutgers, and NOVA Southeastern Universities).

DELOS is funded by BP Exploration Ltd, UK, and BP Angola, as well as being supported by Angolan government partners SONANGOL and the Instituto Nacional de Investigação Pesqueira.

The DELOS project is well matched with the NOC’s deep-ocean observation programme “Climate Linked Atlantic Sector Science” (CLASS) and the SERPENT project, a long-standing scientific partnership between NOC and the offshore oil and gas industry that provides NOC scientists with access to industry deep-water remotely operated vehicles and other opportunities for sustained observations in the deep ocean.

Dr Daniel Jones, who is also principal scientist of the SERPENT project said: “This work is a great example of what can be achieved in industry-academic partnerships, an exchange of engineering know-how, and a science outcome impossible to achieve by other means. The coming United Nations Decade of Ocean Science for Sustainable Development (2021–2030) calls for a major expansion of projects of this type if we are to meet the challenge of predicting the future ocean”.