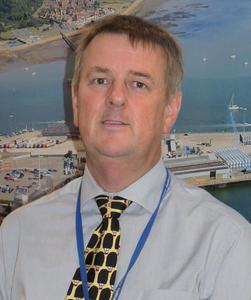 The Director providing strategic leadership for the large research infrastructure, specialist facilities and data assets that support UK marine science has been appointed by the UK’s National Oceanography Centre.

Geraint West will take up the new position as NOC’s Director of National Marine Facilities from 1 October 2013.

Geraint will be responsible for the facilities and assets which constitute a major part of the UK’s national capability in marine science and are managed by NOC for the whole science community on behalf of the Natural Environment Research Council (NERC). They include the two global class, multi-purpose oceanographic research ships, RRS Discovery and RRS James Cook; the National Marine Equipment Pool and its specialist team of sea-going technical and engineering staff; the Marine Robotics and Autonomous Systems (MARS) Facility; the British Ocean Sediment Core Research Facility (BOSCORF) and the British Oceanographic Data Centre (BODC).

After graduating with a BSc from the University of London, Geraint followed a career as a specialist hydrographic survey officer in the Royal Navy, which included an exchange posting at the US Naval Oceanographic Office, Stennis Space Centre, Mississippi and a tour as Officer-in-Charge of Surveys in the ice patrol ship, HMS Endurance. He then moved into industry where he supported the US Army Corps of Engineers, pioneering work in the field of airborne laser hydrographic survey. Geraint has been at the National Oceanography Centre since 2001, first as Head of UK Ocean Research Services and then National Marine Facilities Sea Systems. During this period he has overseen the introduction into service of the RRS James Cook and more recently, the creation of the MARS Facility.

Welcoming the appointment, Professor Ed Hill, Executive Director of the NOC, said “I am delighted that Geraint West will be taking up this key strategic leadership role within the NOC. He brings a wealth of experience for ensuring there are world-class facilities and expertise to support and enable world class science. NERC has invested heavily in marine research facilities and it is important to maximise the benefits of these for science and for the UK economy and society as a whole. The unifying theme of the role is supporting the capacity for generating and accessing the data which is the bedrock of all science – from the infrastructure and technologies needed for collecting new data to the management of existing data for the long-term and ensuring its ease of access – so that, once collected, data can be used many times, both for science and as the basis for information to underpin decisions by government, business and citizens”.

Geraint said “This is a particularly exciting time to be taking on this new role: NERC has just taken delivery of one of the most advanced research ships in the world, in the shape of the RRS Discovery, while the ‘Eight Great Technologies’ investment in autonomous systems is underpinning our ability to take an international lead in transforming ocean observation. These innovations comprise a number of challenges, not least of which is learning how to handle data from an increasing number of new systems, and in more demanding timescales. It is critical that the whole UK marine science community are partners in this and I am looking forward to working with them to set the future agenda for delivery from NERC’s portfolio of world-class marine facilities.”

An early priority will be the recruitment of two positions: the Head of the British Oceanographic Data Centre (following the announcement in July 2013 of the retirement of Dr Juan Brown) and the post of Head of Sea Systems. The NOC is pleased to announce that Captain Robin Plumley will be acting as interim Head of Sea Systems from 1 October 2013.