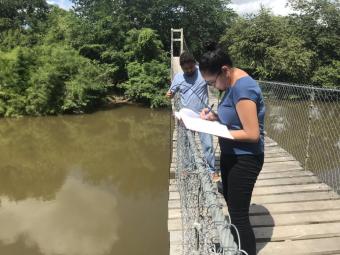 Converting Central American tropical forests into agricultural land is changing the colour and composition of natural material washing into nearby rivers, making it less likely to decompose before it reaches the ocean, a new Southampton-led study has shown.

The flow of dissolved organic material, such as soil, from land to the oceans plays an important role in the global carbon and nutrient cycles. Changing how land is used can alter the type and amount of material being transported, with widespread implications for ecosystems.

In this latest study, an international research team set out to learn more about the effects of deforestation on the coastal environment by studying material that flowed into rivers from various settings in a Central American rainforest, tracking its progress into the sea off the coast of Belize, home to the world’s second largest barrier reef.

Stacey Felgate, a PhD Student at the University of Southampton and the National Oceanography Centre, led the study working with partners in Belize. Stacey said, “Like many countries in the region, Belize is experiencing a rapid rate of deforestation due to increasing need for agricultural and urban land, whilst the economy also relies on the fishing and tourism industries on the coastline. Despite this, there has been very little research into the impact that changing land-use at such a fast pace is having on the region’s coastal ecosystems.”

The findings of the research, published in the journal JGR Biogeosciences, showed that significantly more coloured material is entering the rivers from land used for farming, compared to naturally forested sites.

As the material continued its journey along the river, the team noticed that it accumulated, suggesting that it was not accessible to the micro-organisms who break down natural matter and convert it into carbon dioxide.

When the material reaches the coast, its coloured nature means that it absorbs light and can darken the sea, potentially affecting marine life such as seagrass and corals which need light to grow. The researchers have therefore identified further research into this possible impact as a vital next step in understand what steps are needed to protect coastal ecosystems from deforestation.

Stacey added, “The potential for human activities on land to negatively impact the coastal environment is not unique to Belize, and so our findings are relevant more broadly, particularly for coastal developing nations where deforestation is ongoing but there are no integrated conservation plans between what is happening on land and what is happening in the oceans.”

This study is part of a wider project led by Dr Claire Evans of the National Oceanography Centre. The work was funded by the Commonwealth Marine Economies Programme, which aims to enable safe and sustainable marine economies across the Commonwealth Small Island Developing States.

Other partners in the study included University of Belize, the Coastal Zone Management Authority and Institute (Belize), and the UK Centre for Ecology and Hydrology.