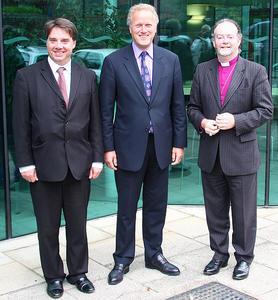 Lord Marland, Parliamentary Under Secretary of State for the Department of Energy and Climate Change, learned about the National Oceanography Centre’s research and its role as a provider of national marine capability on a visit to Liverpool yesterday (Thursday 16 June). He was accompanied by The Right Reverend James Jones, the Lord Bishop of Liverpool.

After welcoming Lord Marland, NOC Executive Director, Professor Ed Hill, introduced presentations from scientists from NOC and the University of Liverpool who gave the Minister an insight into current research. This was followed by discussions with the Liverpool Low Carbon Economy Committee (LLCEC).

Lord Marland spoke of the importance of ongoing investigation into the Earth’s changing climate and revealed how the work at NOC is well recognised at a government level.

Bishop James suggested the visit following two successful symposiums on climate change hosted by NOC and the University of Liverpool.

Tags:
Liverpool
About Us