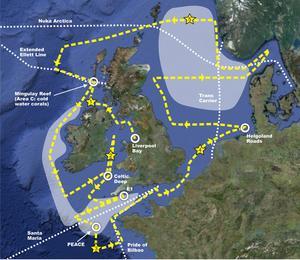 Our ship-board studies will give a glimpse into what may happen to the sea as a whole as atmospheric CO2 continues to rise.

The cruise will range across northwest European seas, circumnavigate the British Isles, and visit the territorial waters of seven different nations. It is expected to end on 11 July 2011.

Through land use changes and the burning of fossil fuels (oil, gas and coal) for energy, humans are releasing vast amounts of carbon dioxide (CO2) into the atmosphere. This anthropogenic CO2 release is notorious as the likely cause of global warming. However, it is also responsible for another potentially major environmental problem – ocean acidification.

“More than two billion tonnes of carbon are entering the ocean as CO2 every year, over and above the natural amount,” explained consortium leader Dr Toby Tyrrell of the University of Southampton’s School of Ocean and Earth Science (SOES), based at the National Oceanography Centre Southampton. “This extra CO2 is making seawater more acidic, with consequences for marine life that remain poorly understood.”

On the cruise, the researchers will study the impact of the changing chemistry on marine organisms and ecosystems, on the cycling of carbon and nutrients in the sea, and on how the sea interacts with the atmosphere to influence climate.

They will do this in three main ways. Their first approach will be to look at how the microscopic organisms living in surface waters vary between places where the chemistry of seawater is naturally more acidic or alkaline. By contrasting the observations over a range of different conditions, they hope to improve understanding of how acidification affects organisms living in their natural environment, where natural selection and adaptation have had time to play out.

Their second approach will be to conduct experiments using tanks of natural seawater collected from the surface of the sea and brought into a controlled laboratory on deck. The natural seawater (and the microbes it contains) will then be subjected to various levels of carbon dioxide that may occur in the future. This cruise will conduct the largest ever experiment to examine the effects of changing CO2 levels on real world samples out at sea as opposed to in the laboratory.

Professor Eric Achterberg of SOES is Principal Scientist on the research cruise. He said “We are especially interested how the high CO2 conditions predicted for the future will affect the seawater and the organisms that live in it. Our ship-board studies will give a glimpse into what may happen to the sea as a whole as atmospheric CO2 continues to rise.”

In a third approach, researchers from Heriot-Watt University will be studying how ocean acidification may affect deep-sea corals. Unlike tropical corals, these cold-water species thrive at depth in chilly waters. The only known inshore coral reef in UK waters was discovered east of the Hebridean island of Mingulay by Dr Murray Roberts in 2003. Dr Sebastian Hennige and Dr Laura Wicks will carefully sample this reef to collect live corals. They will run a series of experiments on board ship to monitor coral growth and physiology, before embarking on a long-term experiment to grow these corals under predicted future climate scenarios at Heriot-Watt’s new cold-water coral research laboratory in Edinburgh.

“Patience is the name of the game in this work – cold-water corals grow slowly and it will take the best part of two years to complete the experiments,” said Dr Roberts.

The research is part of the UK Ocean Acidification research programme (UKOA), which comes under the auspices of the Living with Environmental Change (LWEC) partnership. It is funded by the Natural Environment Research Council (NERC) and two government departments, the Department of Environment, Food and Rural Affairs (Defra) and the Department of Energy and Climate Change (DECC).