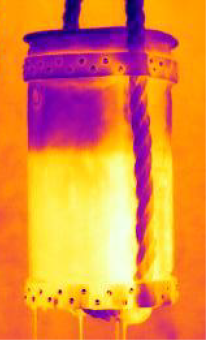 NOC scientists Dr David Berry and Dr Elizabeth Kent have contributed to solving an enduring mystery in climate science – why did different oceans around the world apparently warm and cool at different rates in the early 20th century?

Atmospheric and oceanic models have had trouble accounting for these differences in temperature changes. Now, research from Harvard University and the NOC points to an answer both as mundane as a decimal point truncation and as complicated as global politics. Part history, part climate science, this research corrects decades of data and suggests that ocean warming occurred in a much more homogenous way. The research is published in the journal Nature.

The National Oceanic and Atmospheric Administration (NOAA) and the National Science Foundation’s National Center for Atmospheric Research (NCAR) maintains a collection of sea surface temperature readings dating back to the early 19th Century. The database contains more than 155 million observations from fishing, merchant, research and navy ships from all over the world. These observations are vital to understanding changes in ocean surface temperature over time, both natural and anthropogenic. They are also a statistical nightmare.

How do you compare, for example, the measurements of a British Man-of-War vessel from 1820 to a Japanese fishing vessel from 1920 to a U.S. Navy ship from 1950? How do you know what kind of buckets were used, and how much they were warmed by sunshine or cooled by evaporation while being sampled?

For example, a canvas bucket left on a deck for three minutes under typical weather conditions can cool by 0.5 degrees Celsius more than a wooden bucket measured under the same conditions. Given that global warming during the 20th Century was about 1 degree Celsius, the biases associated with different measurement protocols requires careful accounting.

“There are gigabytes of data in this database and every piece has a quirky story,” said Peter Huybers, Professor of Earth and Planetary Sciences and of Environmental Science and Engineering at the Harvard John A. Paulson School of Engineering and Applied Sciences (SEAS) and senior author of the paper. “The data is rife with peculiarities.”

A lot of research has been done to identify and adjust for these peculiarities. In 2008, for example, researchers found that a 0.3° Celsius jump in sea surface temperatures in 1945 was the result of measurements taken from engine room intakes.  Even with these corrections, however, the data is far from perfect and there are still unexplained changes in sea surface temperature.

In this research, Huybers and his colleagues proposed a comprehensive approach to correcting the data, using a new statistical technique that compares measurements taken by nearby ships.

“Our approach looks at the differences in sea surface temperature measurements from distinct groups of ships when they pass nearby, within 300 kilometres and two days of one another,” said Duo Chan, a graduate student in the Harvard Graduate School of Arts and Sciences and first author of the paper. “Using this approach, we found 17.8 million near crossings and identified some big biases in some groups.”

The researchers focused on data from 1908 to 1941, broken down by the country of origin of the ship and the “decks,” a term stemming from the fact that marine observations were stored using decks of punch cards. One deck includes observations from both Robert Falcon Scott’s and Ernest Shackleton’s voyages to the Antarctic.

“These data have made a long journey from the original logbooks to the modern archive and difficult choices were made to fit the available information onto punch cards or a manageable number of magnetic tape reels,” said Elizabeth Kent, a co-author from the NOC. “We now have both the methods and the computer power to reveal how those choices have affected the data, and also pick out biases due to variations in observing practice by different nations, bringing us closer to the real historical temperatures.”

The researchers found two new key causes of the warming discrepancies in the North Pacific and North Atlantic. The first had to do with changes in Japanese records. Prior to 1932, most records of sea surface temperature from Japanese vessels in the North Pacific came from fishing vessels. This data, spread across several different decks, was originally recorded in whole-degrees Fahrenheit, then converted to Celsius, and finally rounded to tenths-of-a-degree.

However, in the lead-up to World War II, more and more Japanese readings came from naval ships. These data were stored in a different deck and when the U.S. Air Force digitized the collection, they truncated the data, chopping off the tenths-of-a-degree digits and recording the information in whole-degree Celsius.

Unrecognized effects of truncation largely explain the rapid cooling apparent in foregoing estimate of Pacific sea surface temperatures between 1935 and 1941, said Huybers.  After correcting for the bias introduced by truncation, the warming in the Pacific is much more uniform.

While Japanese data holds the key to warming in the Pacific in the early 20th century, it’s German data that plays the most important role in understanding sea surface temperatures in the North Atlantic during the same time.

With these adjustments, the researchers found that rates of warming across the North Pacific and North Atlantic become much more similar and have a warming pattern closer to what would be expected from rising greenhouse gas concentrations. However, discrepancies still remain and the overall rate of warming found in the measurements is still faster than predicted by model simulations.

“Remaining mismatches highlight the importance of continuing to explore how the climate has been radiatively forced, the sensitivity of the climate, and its intrinsic variability. At the same time, we need to continue combing through the data – through data science, historical sleuthing, and a good physical understanding of the problem, I bet that additional interesting features will be uncovered,” said Huybers.

The research was supported by the Harvard Global Institute, the National Science Foundation, and the Natural Environment Research Council.