Coccolithophore blooms in the southwest Atlantic 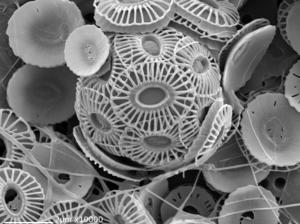 A study led by Dr Stuart Painter of the National Oceanography Centre helps explain the formation of huge phytoplankton blooms off the southeast coast of South America during the austral summer (December–January). The region supports the highly productive Patagonian Shelf marine ecosystem, which includes a globally important fishery.

Coccolithophores are key members of the marine phytoplankton community. They are abundant in the sunlit upper layer of the world’s oceans, often forming vast blooms that can be seen from space.

“Coccolithophores are a complex group of plankton and in many areas of the World Ocean satellite-based observations provide the only information we have. We often have little direct knowledge of the environmental factors coincident with these blooms,” explained Painter.

To understand the environmental factors controlling the development of coccolithophore blooms, Painter and his coauthors joined a cruise led by Dr William Balch of the Bigelow Laboratory (Maine, USA) and measured the salinity, chemistry and nutrient levels of the waters overlying the Patagonian Shelfand the shelf break, where the seafloor dips down to the deep seabed.

They also took measurements at the Brazil/Falklands Confluence to the northeast, where two major currents collide. These are the Brazil Current, which carries warm, saline subtropical waters southwards, and the Falklands Current, which brings cold, fresh and nutrient-rich water up from the sub-Antarctic region.

The continental shelf itself experiences strong tides and inputs from large rivers. And to complicate matters further, low-salinity water also enters the Patagonian Shelf region from the Pacific Ocean through the Magellan Strait in the south.

“The marine environment of the Patagonian Shelf region is well known for its complexity but what has been less clear until now is how this relates to the large blooms of coccolithophores in this region,” said Painter.

He and his collaborators identified five distinct water masses, each having different characteristics, such as temperature and nutrient concentration. These water masses also varied in the amount of chlorophyll in their surface waters, indicating different levels of phytoplankton production.

During the research cruise, a large bloom of the globally ubiquitous coccolthophore species Emiliania huxleyiformed in the sub-Antarctic Shelf Water (SSW), north of the Falkland Islands. The bloom extended north along the shelf break and coincided with the distribution of reflective calcite detected from space, which was otherwise diffusely distributed. Calcite is a carbonate mineral and a common constituent of limestone. It also forms the microscopic plates – ‘coccoliths’ – that surround coccolithophores, possibly for protection.

Chemical and nutrient measurements confirmed that conditions within the SSW were especially conducive for coccolithophore bloom formation, with the right cocktail of nutrients and seawater temperature.

However, the distribution of the SSW is strongly influenced by the shelf break front, which is the focus of intense biological production. It can vary from 20 to 200 kilometres in width determining exactly where conditions are right for coccolithophore blooms.

“The complex interaction of large currents and different water masses clearly exerts strong controls over the position of coccolithophore blooms in this region,” said Painter.

The research was carried out 2008, during the period of peak coccolithophore abundance (December), while aboard the America research vessel Roger Revelle. Remote sensing data collected by the Moderate Resolution Imaging Spectroradiometer (MODIS) instrument the Aqua satellite was acquired from NASA.

The researchers were Stuart Painter, Alex Poulton and John Allen of the National Oceanography Centre, Rosalind Pidcock of the University of Southampton’s School of Ocean and Earth Science, and William Balch of the Bigelow Laboratory for Ocean Sciences, Maine, USA.

The Coccolithophores of the Patagonian Shelf (COPAS) research cruise was funded by the US National Science Foundation. Further financial support was provided by the US Defence Science and Technology Laboratory and the Natural Environment Research Council.