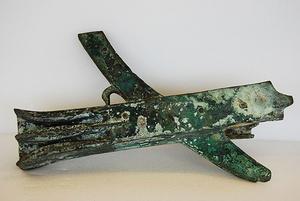 We have learned such a huge amount from the Belgammel Ram and have developed new techniques which will help us unpick future mysteries...

Analysis of a bronze battering ram from a 2,000 year-old warship sheds light on how such an object would have been made in ancient times.

Known as the Belgammel Ram, the 20kg artefact was discovered by a group of British divers off the coast of Libya near Tobruk in 1964. The ram is from a small Greek or Roman warship – a ‘tesseraria’. These ships were equipped with massive bronze rams on the bow at the waterline and were used for ramming the side timbers of enemy ships. At 65cm long, the Belgammel Ram is smaller in size and would have been sited on the upper level on the bow. This second ram is known as a proembolion, which strengthened the bow and also served to break the oars of an enemy ship.

Leading marine archaeologist, Dr Nic Flemming a visiting fellow of the National Oceanography Centre, co-ordinated a team of specialists from five institutes to analyse the artefact before it was returned to the National Museum in Tripoli in May 2010. Their results have been published in the International Journal of Nautical Archaeology.

Dr Flemming said “Casting a large alloy object weighing more than 20kg is not easy. To find out how it was done we needed specialists who could analyse the mix of metals in the alloys; experts who could study the internal crystal structure and the distribution of gas bubbles; and scholars who could examine the classical literature and other known examples of bronze castings.

“Although the Belgammel Ram was probably the first one ever found, other rams have since been found off the coast of Israel and off western Sicily. We have built a body of expertise and techniques that will help with future studies of these objects and improve the accuracy of past analysis.”

Dr Chris Hunt and Annita Antoniadou of Queen’s University Belfast used radiocarbon dating of burnt wood found inside the ram to date it to between 100 BC to 100 AD. This date is consistent with the decorative style of the tridents and bird motive on the top of the ram, which were revealed in detail by laser-scanned images taken by archaeologist Dr Jon Adams of the University of Southampton.

It is possible that during its early history the bronze would have been remelted and mixed with other bronze on one or more occasions, perhaps when a warship was repaired or maybe captured.

The X-ray team produced a 3-D image of the ram’s internal structure using a machine capable of generating X-rays of 10 mevs to shine through 15cm of solid bronze. By rotating the ram on a turntable and making 360 images they created a complete 3-D replica of the ram similar to a medical CT scan. An animation of the X-rays has been put together by Dr Richard Boardman of m-VIS (mu-VIS), a dedicated centre for computed tomography (CT) at the University of Southampton.

Further analysis was carried out by geochemists Professor Ian Croudace, Dr Rex Taylor and Dr Richard Pearce at the University of Southampton Ocean and Earth Science (based at the National Oceanography Centre). Micro-drilled samples show that the composition of the bronze was 87% copper, 6% tin and 7% lead. The concentrations of the different metals vary throughout the casting. Scanning Electron Microscopy, SEM, reveals that the lead was not dissolved with the other metals to make a composite alloy but that it had separated out into segregated intergranular blobs within the alloy as the metal cooled.

These results indicate the likelihood that the Belgammel Ram was cast in one piece and cooled as a single object. The thicker parts cooled more slowly than the thin parts so that the crystal structure and number of bubbles trapped in the metal varies from place to place.

The isotope characterisation of the lead component found in the bronze (an alloy of copper and tin) can be used as a fingerprint to reveal the origin of the lead ore used in making the metal alloy. Up until now, this approach has only provided a general location in the Mediterranean. But recent advances in the analysis technique means that the location can be identified with higher accuracy. The result shows that the lead component of the metal could have come from a district of Attica in Greece called Lavrion. An outcome of this improved technique means that the method can now be applied to other ancient metal artefacts to discover where the ore was sourced.

Micro-X-Ray fluorescence of the surface showed that corrosion by seawater had dissolved out some of the copper leaving it richer in tin and lead. It is significant that when comparing photographs from 1964 and 2008 there is no indication of change in the surface texture. This implies that the metal is stable and is not suffering from ‘Bronze Disease’, a corrosion process that can destroy bronze artefacts.

The Belgammel Ram was found by a group of three British service sports divers off the coast of Libya at the mouth of a valley called Waddi Belgammel, near Tobruk. Using a rubber dinghy and rope they dragged it 25 metres to the surface. It was brought home to the UK as a souvenir but when the divers discovered that it was a rare antiquity, the ram was loaned to the Fitzwilliam Museum, Cambridge.

Ken Oliver is the only surviving member of that group of three and the effective owner. He decided in 2007 that is should be returned to a museum in Libya. With the help of the British Society for Libyan Studies this was arranged in 2010. During the intervening period Dr Nic Flemming invited experts to undertake scientific investigations prior to its return to Libya. These services were offered freely and would have cost many tens of thousands of pounds if conducted commercially. The team’s objective was to understand how such a large bronze was cast, the history and composition of the alloy, its strength, how it was used in naval warfare, and how it survived 2,000 years under the sea.

Since the Belgammel Ram was discovered, other rams have been found, some off the coast of Israel near Athlit, and more recently, off western Sicily. The latter finds look to be the remains of a battle site. On 8 April there is a one-day colloquium hosted by the Faculty of Classics, University of Oxford, to discuss the finds of the Egadi Islands Project.

Nic Flemming continued “We have learned such a huge amount from the Belgammel Ram and have developed new techniques which will help us unpick future mysteries.

“We will never know why the Belgammel Ram was on the seabed near Tobruk. There may have been a battle in the area, a skirmish with pirates. It could be that it was cargo from an ancient commercial vessel, about to be sold as salvage. The fragments of wood inside the ram show signs of fire, and we now know that parts of the bronze had been heated to a high temperature since it was cast which caused the crystal structure to change. The ship may have caught fire and the ram fell into the sea as the flames licked towards it. Some things will always remain a mystery. But we are pleased that we have gleaned so many details from this study that will help future work.”

The Libyan uprising of 2011 resulted in many battles in the area around the museum. Fortunately the museum suffered no damage. The Belgammel Ram is safe.