Arctic environment during an ancient bout of natural global warming 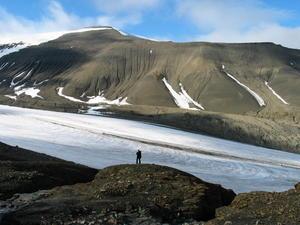 Scientists are unravelling the environmental changes that took place around the Arctic during an exceptional episode of ancient global warming. Newly published results from a high-resolution study of sediments collected on Spitsbergen represent a significant contribution to this endeavour.

The study was led by Dr Ian Harding and Prof John Marshall of the University of Southampton’s School of Ocean and Earth Science (SOES), based at the National Oceanography Centre, Southampton.

Around 56 million years ago there was a period of global warming called the Paleocene–Eocene Thermal Maximum (PETM), during which global sea surface temperatures increased by approximately 5°C.

The warming of the oceans led to profound ecological changes, including the widespread extinction of many types of foraminifera, tiny single-celled organisms with distinctive shells. Plankton that had previously only prospered in tropical and subtropical waters migrated to higher latitudes. Similar changes occurred on the land, with many animals and plants extending their distributions towards the poles.

“Although environmental changes associated with the PETM at low- to mid-latitude settings and high southern latitudes are well documented, we know less about these changes at high northern latitudes,” explained Dr Harding.

Information about the Arctic environment during the PETM has come predominantly from sediment cores drilled from under the pack ice on the Lomonosov Ridge (~ 88°N) by the Integrated Ocean Drilling Program (IODP Site 302-4A). However, these cores do not span the entire PETM and therefore do not provide a complete picture.

“Information from other Arctic sites is needed for a better understanding of PETM environmental conditions, such data can then in turn be used in computer models which will improve our understanding not only of past climatic conditions but also enhance our ability to predict future perturbations,” said Dr Harding.

To help fill this knowledge gap, Dr Harding’s team turned to a site (~78 °N) on Spitsbergen in the high Arctic. Here, 2.5-kilometre-thick sediments span the critical period. During the PETM, the site would have been at around 75 °N, the difference in position being due to the slow movement of tectonic plates over millions of years.

Through analyses of plankton and the chemical and magnetic characteristics of the sediments, they were unambiguously able to identify a 15-metre succession of exposed sediment representing the approximately 170 thousand year PETM event.

At the base of the segment they found the preserved remains of the cyst-forming dinoflagellate Apectodinium augustum, a planktonic species diagnostic of the PETM across the globe. In fact, the species was already present in Spitsbergen before the shift in carbon isotope composition formally marking the onset of the PETM, suggesting that environment change was by then already well underway.

Along with data from other sites, their Arctic evidence suggests not only that sea level began to rise well before the formal onset of the PETM, but also that it peaked about 13,000 years into the period.  At the same time, increased surface-water run-off from the land dampened water-column mixing and led to stratification, with an upper freshened layer that overlay denser, more saline seawater beneath.

By carefully comparing their results with those from IODP Site 302-4A to the north, they found evidence for regional differences in the environmental manifestations of the PETM in high northern latitudes. For example, the evidence from the IODP site suggests that the sunlit surface layer of the ocean was often depleted of oxygen, the results from Spitsbergen suggest that oxygen depletion was largely restricted to the bottom waters and sediments. In addition, they found that pollen from flowering plants was scarce, unlike at the IODP site, suggesting that conditions around the Spitsbergen Central Basin may not have been conducive to the growth of flowering plants during the PETM.

“Because this geologically short-lived event is represented by such an expanded section at Spitsbergen by comparison to other deep water sites, this locality has provided us with opportunities for further high-resolution studies of the PETM, which we are currently preparing for publication,” concluded Dr Harding.

Preliminary field work was funded by The Millennium Atlas Company Limited, and a second expedition with other members of the palaeo-Arctic Climates and Environments (pACE) group was funded by the Worldwide Universities Network.