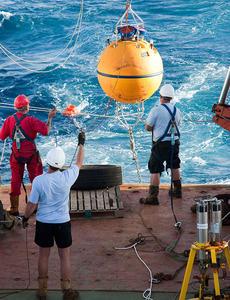 A decade of research on the Atlantic Meridional Overturning Circulation (AMOC), which is important for understanding the climate, reveals some surprising findings about its behaviour.

The AMOC is the system of ocean currents in the North Atlantic responsible for the transfer of huge amounts of heat from the ocean to North Western Europe, keeping its climate relatively mild.

The review was conducted by researchers from the National Oceanography Centre (NOC) and the University of Southampton and will be published today in Science. It notes that AMOC had a significant role in the sudden sea level rise along the northeast coast of the US, as well as the extreme European winter of 2009/10. Another unexpected finding was that AMOC varies greatly in strength from year-to-year. This discovery may help improve the accuracy of seasonal weather forecasts. In addition, the observations show a reduction in the strength of the AMOC by 30% over the last decade, which also has implications for the UK climate.

These surprising discoveries were made possible by a decade of observations of the AMOC, taken as part of the joint UK / US Rapid Climate Change Programme (RAPID).

Professor Meric Srokosz from the NOC, lead author of this review, explained: “This data set has proved an invaluable resource for oceanographers and climate scientists. Previously we had no idea that AMOC had such a high degree of daily, seasonal and inter-annual variability. The new discoveries that the RAPID programme has made over the last decade prove how important it is to keep monitoring the AMOC. If ten years of observations have generated surprises, then 20-30 years will almost certainly do so too.”

Currently data from the RAPID observational array at 26˚N in the Atlantic is collected every 18 months. However, researchers at the NOC are now testing a new system that will enable data to be collected in near real-time via a satellite link to shore. This may allow RAPID data to be used in seasonal forecasts of weather and sea-level changes. For example, the 2009/10 slowdown of the AMOC caused sea levels in New York to rise by 13cm, which led to flooding and beach erosion on a scale similar to that from a hurricane. If scientists had had access to real-time RAPID data in 2009 potentially they could have predicted this event up to two months in advance.

In addition, as part of the NOC led ABC Fluxes project, the RAPID network is also to be upgraded with new sensors that will allow it to acquire biochemical data in the future. This will enable researchers to form a clearer picture of the role of AMOC in absorbing atmospheric CO₂. A recent research cruise to the Florida straits collected the first samples for this project.

RAPID started in 2004 as a collaborative project between Natural Environment Research Council in the UK, and the National Science Federation as well as the National Oceanic and Atmospheric Administration (NOAA) in the US. The project aims to better understand changes to the AMOC and how these can affect the UK’s climate and weather. The project is set to continue acquiring data, as its NERC funding has been extended until 2020.