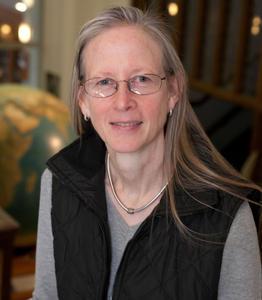 Oxygen minimum zones form in a few special regions of the ocean due to the confluence of high productivity waters (usually fed by upwelling) and slow midwater ventilation. In these regions, depth intervals several hundred metres thick are completely devoid of oxygen.

In the absence of dissolved oxygen, ‘normal’ aerobic respiration cannot occur and thus most animals are excluded from the oxygen depleted zone (ODZ), although some are able to migrate into the zone for diel visits. Microbes in the ODZ utilize alternative forms of respiration, usually involving the use of oxidized nitrogen instead of oxygen as a respiratory substrate.

One of the net results of this anaerobic respiration is the conversion of dissolved ionic nitrogen (nitrate and nitrite) into gaseous nitrogen (nitrous oxide and dinitrogen gas), which is biologically unavailable. Thus the total fixed nitrogen inventory of the ocean is strongly controlled by nitrogen cycling in the ODZs of the world ocean.

Bess will present recent work from her laboratory that has helped resolve some of the mysteries of the pathways of nitrogen biogeochemistry in ODZs, including control over the nitrogen loss processes, and the production and consumption of nitrous oxide.

The upper boundary of the ODZ is a critical depth interval for nitrous oxide cycling because both oxidative and reductive processes can occur there. Slight changes in the oxygen concentration and depth of the boundary region may have significant effects on the total flux of nitrous oxide into the atmosphere.

Even though the oxygen minimum regions comprise a tiny volume of the world ocean, understanding their nitrogen transformation processes is critical because of their role in the fixed nitrogen budget and their sensitivity to global changes in climate/temperature (and thus stratification and stability), nutrient loading and acidification.

The Lecture is scheduled for 4–5pm in the Charnock Lecture Theatre at NOCS.