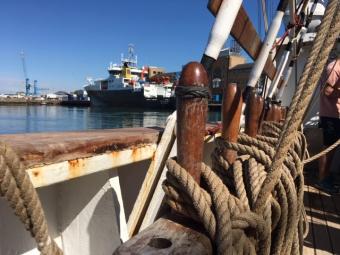 The tall ship Pelican of London is circumnavigating the UK on a mission to mentor young scientists and conduct a ‘British ocean health check’.

As part of its scheduled stop at the National Oceanography Centre in Southampton yesterday the crew collected a replica sailing ship bucket to help their project.

Just before setting sail on the Pelican this morning, Penny Fiddler, CEO of The UK Association for Science and Discovery Centres a partner in the Darwin200 Project, said,

“We are honoured to be collaborating with the National Oceanography Centre on an exciting project for students, to better understand the collection of sea surface temperature data during sea voyages over the last 170 years, since around the time of Darwin, and how these contribute to the climate record.

“The students on the Darwin200 voyage will compare measurements made by modern methods such as those for the MET Office with historic means, using Dr Kent’s replica bucket, to better understand how data and measurements are collected. The full science program for students on board the ship is led by Dr Richard Sandford and Dr Charlotte Braungardt from the University of Plymouth.”

The NOC’s Dr Elizabeth Kent, explains more about her replica sailing bucket and its critical part in the story of past, present and future climate measurement

“The Pelican is contributing observations of meteorological parameters including winds, pressure and temperatures as part of the global observing system which are sent to shore by satellite for immediate use in weather forecasts and also later in climate records.

“Long term climate records of sea surface temperature, such as that produced by the Met Office use these modern observations along with historical measurements, the earliest of which would have been made on sailing ships. Sailing ships would have reported sea temperatures based on the temperature of water sampled in buckets hauled to the ships deck. The challenge of producing consistent climate records is to accurately estimate any biases due to historical observation methods relative to more accurate modern measurements – such as those made using drifting buoys. For the bucket measurements we can do this using models that relate the temperature change of the water in the buckets to the conditions at the time of the observation - for example how sunny or windy it was.

To find out more about the importance of buckets for climate science watch an interview with Dr Elizabeth Kent on the BBC and read more on our website. You can follow the Darwin200 UK voyage over on Twitter @Darwin200_ and their website. This circumnavigation of the UK is in preparation of the 2021 Darwin200 global voyage.

This new collaboration with The UK Association for Science and Discovery Centres, Darwin200 project and Plymouth University is just one way we’re progressing our charitable objective to educate and inspire future generations to engage their talents in the field of ocean science.