The importance of buckets to climate science 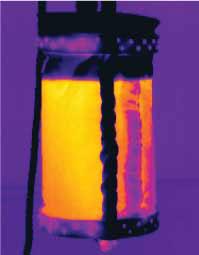 NOC research on the effect of buckets on climatic data was featured in the recent BBC documentary ‘Climate Change by Numbers’, which framed the science of climate change using three numbers.

The first number was 0.85˚C: the global surface temperature change since 1880. In the late 19th and early/mid 20th Centuries measurements of the sea surface temperature were made by collecting samples of surface water using buckets lowered from ships.

However, the buckets cool under typical conditions once removed from the sea and that affects the temperature of the water sample – the extent of this cooling depends on the type of bucket. The uncertainty in the 0.85˚C global average trend is fairly small, but understanding and correcting data obtained from these sampling buckets is important. Without this correction the estimated trend in temperature would be even larger than the increase of 0.85˚C.

The replica buckets shown at the start of the program were borrowed from NOC, who commissioned them in order to make measurements in controlled conditions. These data have allowed NOC to refine and validate models of exactly how the different types of bucket change the temperature of the water sample. The infrared image accompanying this text was taken during lab experiments by researchers Giulia Carella and Andrew Morris. The image shows how the surface of the canvas bucket, shown in the BBC program, loses heat.

These detailed measurements are part of a research project, funded by the Natural Environment Research Council, called HOSTACE (Historical Ocean Surface Temperatures: Accuracy, Characterisation and Evaluation). These adjustments have been applied to existing surface temperature datasets in order to homogenise the data over large geographical areas and long periods of time. HOSTACE is looking at the individual observations, understanding how different types of buckets show different amounts of temperature change, and investigating whether these same signals are observed in individual historical measurements of sea surface temperature.

Project leader (and proud bucket-owner) Elizabeth Kent said &lqduo;using different methods to estimate the biases in the sea temperature measurements is a good way of reducing uncertainty in our understanding of long term trends”.

HOSTACE is a joint project between NOC and the Universities of Reading and Edinburgh and will be producing a new version of the global ocean temperature time series.

The bucket makes an appearance at 08:20 in the documentary.

Image: Infrared picture of the canvas bucket filled with warm water. Yellow and red colours show areas where the temperature is hottest and are therefore losing heat. These measurements were taken in the lab at NOC and a desk fan was used to simulate the effects of air flowing around the bucket. The picture shows lower temperatures (purple colours) towards the right hand side where the fan was directly blowing on the bucket causing cooler temperatures.