Yesterday evening we passed between Dover and Calais and entered the North Sea. At one point we travelled quite close to a giant wind farm installed far out at sea, faintly and eerily visible through the light mist but, from where we were, completely silent.

Today’s blog entry, by Lizeth Avendaño from the National Oceanography Centre Southampton, is related to yesterday’s on nutrients.

This morning we arrived at a site specially chosen because past measurements suggested it would be high in CO2. Sure enough it was, with values exceeding atmospheric, in contrast to elsewhere on our track where seawater CO2 is lower than atmospheric at this time of year. Here we collected water to begin our fourth bioassay experiment.

Today’s blog entry, by Lizeth Avendaño from the National Oceanography Centre Southampton, is related to yesterday’s on nutrients. As well as needing nitrogen and phosphorus in large quantities, phytoplankton also need some other elements in very small amounts. These include metallic elements such as iron. In the same way that people take vitamin supplements that also contain small quantities of essential metals, phytoplankton also have to get them (albeit not very much off them) if they are to grow and reproduce. Other metals, in particular copper, can on the other hand be toxic if present in excess.

The importance of phytoplankton, at the base of the food chain in the sea, has been described in previous blogs. A decrease in surface ocean pH (ocean acidification) can affect how easily phytoplankton can get hold of metals such as iron, manganese, cobalt, copper, zinc and cadmium. Because these metals do not dissolve easily in seawater, and once dissolved tend to be rather rapidly removed, they are present only at extremely low concentrations in seawater. For this reason they are known as ‘trace metals’.

Dissolved trace metals exist in two main forms in seawater, complexed (that is, attached to other molecules, normally more than 99% of the total concentration of the metal) and free dissolved (not attached to other molecules). A decrease in pH generally increases the fraction of their free dissolved forms. This usually makes them more available to phytoplankton. For nutrients this is a good thing, but in some cases it can be too much of a good thing. A good example of this nutrient-to-toxin transition is the copper free ion, which has been shown to be toxic to marine phytoplankton at high concentrations, hence the interest to study it during this cruise.

The other trace metal we are focusing on is iron. Phytoplankton growth rates (that is, how fast they proliferate) are known to be limited by iron availability over at least 10% of the ocean’s surface. It is thought that the availability of iron to phytoplankton may decline because of ocean acidification, and that is one of the things we are looking at in the experiments we are undertaking on this cruise... 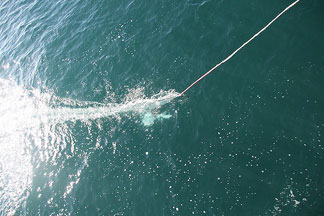 The procedure we follow to collect the seawater samples for this study is quite different from the one followed by most of the people on this cruise. We do not collect water from the CTD, which makes me feel really lucky as I do not have to wake up at 4:30 in the morning like them. Our procedures are all governed by an overriding essential need to avoid contamination. You can easily understand the problem if you realize that we are trying to study extremely low concentrations of iron while working on a ship made of iron! All of the early studies of trace metals in the ocean were rendered useless because of contamination.

To keep our seawater samples free of any contact or influence from our iron ship, we collect our water instead from a special device called a “fish” (see photo), which is held out from the side of the ship on a boom. With the help of a pump, water from the fish is piped into a clean container located on the back deck of the ship (see photo). This is something else that is different about my work compared to most of the other people on this ship, as most of the time I have to work alone inside my container, with little social interaction.

Using only plastic apparatus that has been rigorously cleaned beforehand to remove any metal contamination, the seawater is then filtered and collected carefully into bottles. Some of these bottles I freeze right after collection to analyse later at home (for the iron experiments), and some of them I analyse right away in the container (for copper). Three of the bottles are treated every day to adjust them to different pH levels (8.1, 7.6 and 7.2, respectively). From each of these samples, 13 subsamples (each with a different copper concentration) are prepared and left overnight in the container. The next day, they are analysed to measure the concentration and chemical forms of the trace metal.

So with this now well established routine I hope by the end of the cruise to have some data to test the hypothesis that ocean acidification will affect the chemical forms of iron and copper as we move to lower seawater pH levels.