It is now three weeks since we left port, with another two still to go until we set foot on dry land again. Soft fruit has of course long since run out but we are still plentifully supplied with apples and oranges.

This blog is written by Alex Poulton from the National Oceanography Centre at Southampton, on work to probe carbon cycling in seawater. There are similarities to Darren Clark’s entry a few days ago, on nitrogen cycling.

The chefs perform miracles and they are still, somehow, making salads, but presumably these too will disappear from the menu before too long. Fresh milk was one of the first items to be lost, but we have long since learned to love (or at least to endure) UHT milk. Bread comes mainly in the sliced variety but we get freshly-baked rolls. Overall there is much appreciation of the quality and variety of the food that we get, including some amazing desserts. And of course it is all provided ‘on a plate’ for us – we never have to stir a finger to make anything ourselves.

Today we are enjoying glorious sunshine off the German coast, after another 4 am CTD. We are currently heading north in the North Sea, where the bottom depth rarely exceeds 40 m and the water is well mixed from the top to the bottom. Whereas we saw lots of oil rigs, container ships and tankers in the southwest of the North Sea, now that we are further east (see red dot on the map), the horizon is frequently empty.

Phytoplankton take up CO2 into their cells through the process of photosynthesis, just like land plants. Because some of the phytoplankton particles later sink down under gravity, taking their carbon with them, this process transports carbon further away from the atmosphere and so acts to reduce atmospheric CO2 and hence greenhouse warming. It is important to understand the workings of this ‘carbon pump’, and whether it could be affected by ocean acidification. Another key measurement being made during this cruise is therefore how efficiently the different phytoplankton living in different parts of the waters around the UK are fixing CO2 into their cells. 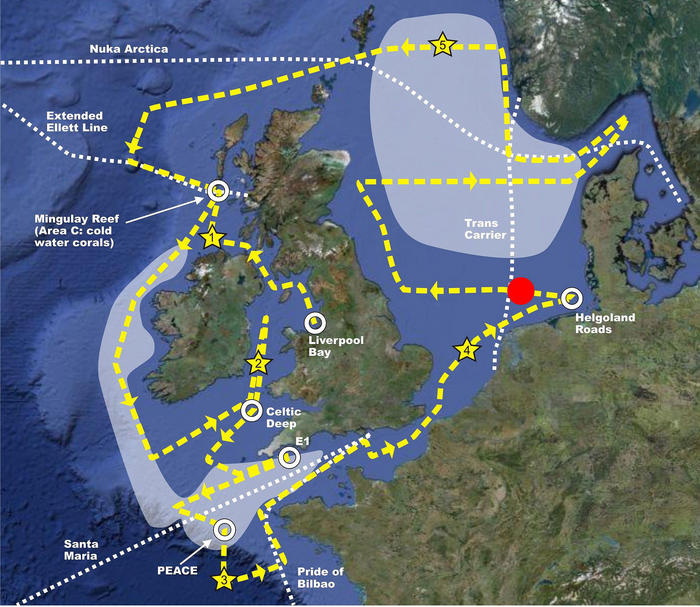 In order to measure this rate of photosynthesis, we are using a technique where we add dissolved CO2 in which the carbon atoms have been artificially altered to be radioactive. These unnaturally-produced carbon atoms have a mass of 14 rather than the normal mass of 12, and release energy in the form of radiation as they radioactively decay. In order to measure how quickly the phytoplankton are photosynthesising, we collect water samples from different depths in the water, add the distinctive dissolved CO2 (see photo), and then incubate the water samples in special incubators which mimic the light experienced by the phytoplankton naturally in the water. After a set amount of time, typically a day, the water samples are filtered and the radiation in the cells collected on the filters is measured. This radiation is measured by liquid scintillation counting - the radioactive decays, or disintegrations, are turned into light and these pulses of light are counted.

These measurements of photosynthesis are carried out in seawater from each of the pre-dawn 4 am CTD casts, allowing the phytoplankton to ‘wake up’ in the incubators as the sun rises. We also do them in the water from the large-scale bioassays, to look at the effect of increasing CO2. We are also measuring photosynthesis in a special incubator (‘photosynthetron’) which exposes the cells to a wide range of light – this exposure to very high and very low light levels tells us something about the efficiency of the way the phytoplankton are utilising the light they experience in the water column. By changing the filters we use to collect the phytoplankton cells at the end of the incubations we are also making measurements of different sizes of phytoplankton cells – so we can directly measure the amount of photosynthesis by both the small and large organisms present in the waters we are sampling. 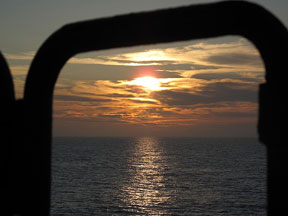 As well as photosynthesis, some phytoplankton fix CO2 into inorganic structures – these are the coccoliths (calcium carbonate shields) that coccolithophores build. With some very slight modifications, we are using the same technique to measure the rate of production of calcium carbonate in the water (‘calcification’).

Both of these measurements provide vital clues as to how phytoplankton respond to living along gradients in water chemistry (temperature, salinity, CO2, pH), nutrient and light availability, as well as how they may respond in the future if dissolved CO2 levels increase.