The CTD has been recovered from its journey to the deeps, and is now working again. We are all of us relieved to be able to get back to our normal pattern of work.

At 2am we collected the water for our third bioassay experiment. Everything went smoothly and efficiently and within a few hours we had dispensed water from the CTD bottles into the bioassay bottles, manipulated their CO2 levels, and installed all 80 or so of them in the bioassay container. In fact there were more than 100 bottles in the container at one point today because of some additional side experiments. The aim of one of the side experiments was to examine the combined effects of nutrient level at the same time as CO2 level. The aim of another is to look at the effect of ocean acidification on foraminifera, another calcium carbonate-shelled member of the plankton that we chanced upon during our brief time in the open ocean. 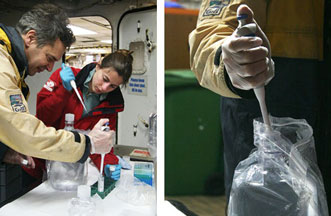 While collecting the water at 2am this morning we had a surprise when we looked over the side of the ship. We were treated to a natural spectacle in terms of some unexpected sea life in the water next to the ship. Swarms of small squid, each maybe 5 cm long, darted about, possibly attracted by the bright lights of the ship. Later we saw one solitary much larger squid, pale brown in colour, more than a metre in length, swimming a few metres below the surface. 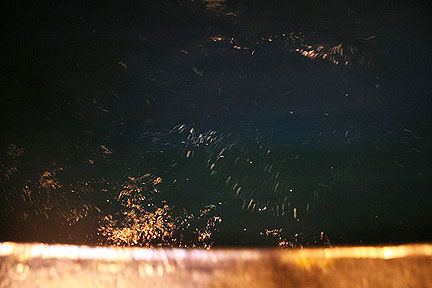 Even more bizarrely and unusually, we realised there were also thousands of swimming crabs in the water, this despite us being over a hundred kilometres from the nearest land. It turns out that some species of crabs live like this, having evolved to follow a perpetually swimming lifestyle. Out of all of the scientists looking out over this scene, some having spent more than a year in total at sea, only one had ever seen this phenomenon before. So now we have been lucky enough to have encountered both swimming snails and swimming crabs. We are not sure quite what to expect next. 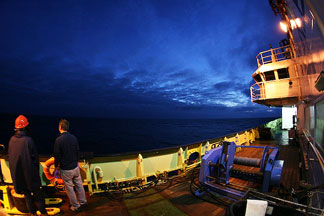 Having completed our deep water detour with another two CTD stations, we are now heading back towards the ‘shelf break’ (the boundary where the deep sea meets the shallower sea) west of Brittany in France, where we will collect water samples tomorrow before travelling eastwards to south of the UK and into the English Channel. 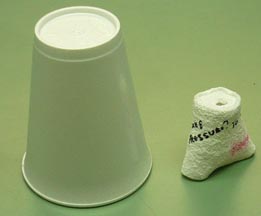