Most work has not been possible today, due to a problem with the cable that the CTD is lowered on. Thanks to some hard graft from the ship’s engineers, it looks to be repaired now and we hope to be back at work tomorrow morning early.

One line of work that has not been affected is the research on the cold-water corals that were collected from Mingulay (9 June blog entry). Since then Laura Wicks and Sebastian Hennige have begun examining the metabolism (metabolism relates to how hard their bodies are working) and feeding habits of Lophelia pertusa, and assessing how the corals respond to short-term stressors, such as temperature and CO2 increases. 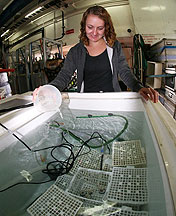 To do this, they have specially designed chambers for the corals, which are air- and water-tight and contain magnetically-turned stir bars, designed to provide a sealed container that has water movement within it. By placing the corals in these chambers, their respiration (the rate at which the corals breathe in oxygen) can be measured, and that can tell us how well the coral is coping under controlled conditions. During the cruise, some of the corals collected will be subject to CO2 and temperature levels predicted for the end of the century, and their metabolic responses recorded. If the corals increase their respiration, this will indicate that they are needing to use more energy in order to carry out their normal, everyday, activities, and thus they will have less energy available for growth and reproduction. 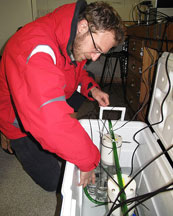 During the cruise, feeding trials are also being conducted on the corals, as very little is known about what Lophelia actually eat. Cold-water corals wait for the food to come to them and feed by snatching passing prey out of the water column using their tentacles. Each polyp of Lophelia has 16 tentacles, which can be used like nets and waved in the moving water. When a food particle or animal touches a tentacle, specialised cells called nematocysts inject a stunning poison into the prey. The prey is rendered immobile, and the polyp gently moves the prey into its mouth. It is thought they have a mixed diet of algae (phytoplankton, such as those featured on the blog recently) and zooplankton, but because these corals are so challenging to collect there is very little data on their feeding habits.

The trials being conducted on the cruise will record how much food the corals eat and how quickly they eat different types of food, such as algae and brine shrimp (pictured ensnared in mucus around the polyp).

For more information on the biology of cold-water corals, please visit www.Lophelia.org.