Unfortunately no repeat of the wildlife spectacular during this morning’s CTD station. We are now headed northeast towards the western tip of Brittany in France.

Today’s blog entry is written by Darren Clark from Plymouth Marine Laboratory, who is looking at whether ocean acidification will affect cycling of the chemical element nitrogen in the oceans, which all life requires.

Biologically important elements such as carbon and nitrogen exist in various forms. These can be as molecules dissolved in seawater, or as organic forms within living cells on land and sea, or as atmospheric gases. Physical, chemical and biological processes drive the transformation and exchange of carbon and nitrogen between these forms. This process, termed ‘biogeochemical cycling’ helps us to understand the nature of the interactions between land, sea and air. By representing this understanding in the form of mathematical models, we may develop a predictive capability, which will allow us to examine the potential consequences of major global events such as climate change, and the related process of ocean acidification (OA), on the world’s biogeochemical cycles.

The climate change phenomenon, and the process of OA, is a modification or ‘perturbation’ of the carbon cycle. This is being caused by the burning of fossil fuels by man. Within the global ocean, the biogeochemical cycles of carbon and nitrogen are closely related through quite well defined numerical relationships. If the carbon cycle is knocked off balance, what impact does this have on the other biologically important elemental cycles? How are the well established numerical relationships between elements such as carbon, nitrogen and phosphorous modified under OA conditions? 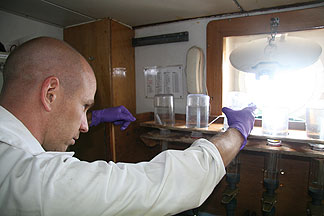 During this cruise, I have been looking at how OA may influence some of the processes which make up the nitrogen cycle in the sunlit region of the ocean. When dissolved in seawater, forms of nitrogen are a major nutrient for the growth of photosynthetic micro-organisms, a process termed ‘nitrogen assimilation’. Occasionally, when there are more than enough nutrients in the sunlit ocean, phytoplankton can proliferate or ‘bloom’, discolouring the water to such an extent that it can be observed from space by satellites. Such events are often related to nitrogen availability. Similarly, when the nutrients run out, blooms collapse. When phytoplankton in a bloom start to die off, processes associated with bacteria become more important in the nitrogen cycle. These processes, called ‘nitrogen regeneration’, effectively turn the nitrogen back into a form which can be used by the phytoplankton at a later date when the conditions are right. Even though the processes of nitrogen assimilation and regeneration are most active during bloom events, they actually occur all the time in seawater, and help to keep the nitrogen cycle ticking over smoothly. So the question is, will the nitrogen cycle still run smoothly if seawater becomes more acidic?

I have attempted to address this question during this cruise. During the OA bioassays I have been investigating the impact of futuristic CO2 scenarios upon the nitrogen cycle. I have also been gathering information on the nitrogen cycle as it exists today in the shelf seas of the UK and surrounding area. To do this I use stable isotope methods combined with Gas Chromatography Mass Spectrometry (GCMS) and Isotope Ratio Mass Spectrometry (IRMS) – two very sensitive (and quite expensive) bits of kit. I hope that the information gained will help to improve the models we presently use to simulate ecosystem processes, and ultimately, to improve our predictive capability. At least that’s the plan...