The last few days have seen fairly high winds and big waves (see photos). Some stops for water sampling have had to be cancelled because it has been too dangerous to lower the CTD into the water.

Portholes have had to be screwed down, rims be added around the dinner tables to stop plates sliding off, all unsecured items be stowed away, and doors to the outside be shut on the lower decks.

Trying to get to sleep, and once asleep to stay asleep, has on occasion been a bit of a challenge. If you are familiar with the feeling you get when a lift starts suddenly to descend, or when the car you are in travels at speed over a humpback bridge, or when a roller-coaster starts its descent, then you will understand some of what it feels like at sea in a big swell. It is quite strange to get that feeling when trying to get to sleep. It doesn’t help the drifting off process if your bed occasionally feels as if it is lurching down and away from you!

Nevertheless, most of us appear to have got our sea-legs by now and to have coped with it fairly well.

Partly in order to avoid the worst of this weather, we have travelled further south and west than we had originally intended, quite a long way off the cruise map shown to the top right. At 45.5°N, 7°W, we are now more or less equidistant from France and Spain, and a fair bit closer to either than to the UK.

Another benefit of this deviation is that we have headed further out into the deep ocean, far from the continental shelf. We now have more than four kilometres of water beneath us rather than 100 metres or so along most of rest of the route. This will allow us to collect true oceanic water for our third bioassay experiment. This experiment will therefore be from a very different marine environment than the first two. The advantage of varying the environments is that any results we obtain will be that much more general in their applicability. Any results appearing in all bioassays should be widely relevant. 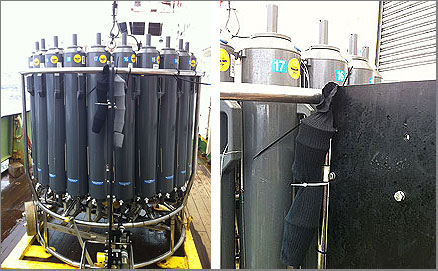 Because we are out in deep water, we were able to lower the CTD down to unprecedented depths for us (conditions have now improved sufficiently to resume them). It was lowered down to more than a kilometre under the surface, to where pressures are extreme (with every extra 10 metres depth in the sea, the pressure increases by another atmosphere). A classic demonstration of the incredible pressures down there is to attach foam polystyrene cups to the CTD. When they return to the surface they have shrunk to a fraction of their original size.

As you can see in the photos, socks full of the cups were tied to the CTD. We were hoping to be able to show you photos of them following their dive, but unfortunately the CTD has been delayed in its return to the surface and the photos will have to wait for another day.