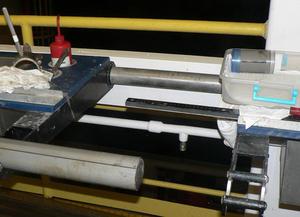 There are a total of about 120 people on board the Joides Resolution, with scientists making up about a quarter of the crew. The scientific party is divided into two shifts – one half from midnight to midday, and the other covering the day shift – that are essentially mirror images of each other.

Given the nature of the sediments we are attempting to recover, the largest and by far the busiest group are those devoted to describing the cores. This group includes Pete Talling from the NOC. Given that a single 10 metre core may contain upwards of 50 ash layers or turbidites, and there are times when cores are arriving on deck every 45 minutes, the work pressure can be intense. Another group of scientists is devoted to measuring physical properties of the sediment cores, such as magnetic susceptibility and density, as well as simply providing a photographic record of all the material.

Fortunately, my job is a little more measured in terms of the spread of the work load. Along with three other geochemists, it is my responsibility to select 10 cm sub-sections of the core from which we extract the pore fluids by squeezing the sediments in a high pressure cylinder. The picture shows the end of the core with the capped whole round section of sediment in the top right hand corner ready for transport to the lab. We then measure the chemical composition of these pore fluids to determine the diagenetic reactions taking place within the sediment column.

All these results will appear in the Site Reports of the expedition that will be available to the wider scientific community with a few months of the end of the cruise, and will help other scientists who weren’t on the ship select samples for analysis in the coming years.