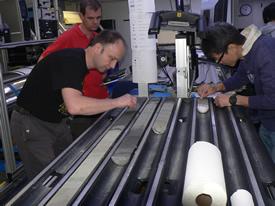 We are now at the halfway point in the cruise and focused on the drill sites off of Martinique. However, Montserrat is still very much on our minds.

Adam Stinton of the Montserrat Volcano Observatory is on board and has been accessing the real time data from the island’s seismic stations and remote cameras. These showed that shortly after we left the site there was a period of seismic activity in the early hours of Friday 23 March (local time), followed several hours of ash venting. It would have been nice to see the volcano in action while we were coring, but we have the consolation that updated palaeo-magnetic and biostratigraphic information from our last site at Montserrat shows that we have a complete record of volcanic activity extending back four and a half million years, two million years longer than we previously thought.

We have just completed our first site close to Martinique and obtained a similarly impressive record of volcanic activity from the upper 100 metres of the hole. It doesn’t extend back as far as the Montserrat record, but it does contain many more tephra layers, so our logging team have been particularly busy trying to record as much information as possible in the relatively short time available before the next core arrives on deck. The picture shows Pete Talling from NOC logging a section of hemipelagic sediment (pale layers), volcanic turbidites (thick dark layers) and ash fallout (thin dark layers), with Yoshi Tamura (Japan) and Adam Stinton.