Drilling expedition to the Ring of Fire 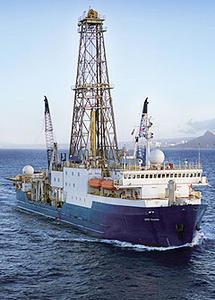 Scientists based at the National Oceanography Centre, NOC, are onboard the RV JOIDES Resolution as part of the Integrated Ocean Drilling Program, IODP. Expedition 340 will look at volcanism and landslides around the Lesser Antilles.

Professor Martin Palmer, Ocean and Earth Science University of Southampton and Dr Pete Talling, NOC, will be sending a series of weekly updates from the ship, here is the first...

None of the scientists on this leg had ever sailed on the Joides Resolution before, so we had a fairly intensive period of training into how everything works. The equipment was already set up and waiting, and it is backed up by an excellent group of IODP staff.

Our first drill site was close up to the volcano and into the margins of the debris flows originating from various dome collapse events since Montserrat became active again in 1995. From previous cruises to the area we knew this was going to be a tough site to recover material from because of the blocky nature of the deposits – and so it proved. Still, we managed to get down to ~50 m below seafloor and recover enough material to make it worthwhile.

Our next site was a further 10 km from the island, and met with much better success. We drilled through the top layer of debris flows, that were about 100 m thick, and into the underlying pelagic carbonates. These contained lots of volcanic layers with some interesting diagenetic and bioturbation relationships. We also managed to penetrate into another debris flow at a depth of ~220 m, but unfortunately the drill string became stuck when we tried pull out. Eventually it was decided to blow our way clear, and we are now just about to drill a second hole at the site.