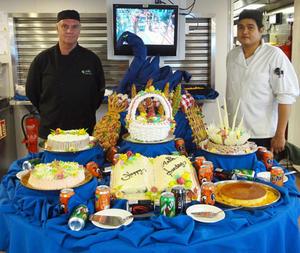 We are now approaching the last week of the expedition and this time next week we will (hopefully!) be relaxing in the hotel bar in Curacao.

In the meantime, we are coring large mass flow deposits off the coast of Martinique. These are difficult sites to get material from as they tend to be made up of layers of coarse sand, lying between muddier hemipelagic sediments. As a result, there have been a few sites where core recovery has not been as good as we might have wished for. This wasn’t helped when we became entangled in an unmarked fish attraction device (FAD) that managed to wrap close to 3 km of line around the drill pipe. However, at this present site we have managed to piston core (APC) all the way to a depth of about 200 metres below the seafloor, with close to 100% recovery. At that point the sediment became too stiff and we had to switch over to the extended core barrel (XCB), but recovery is still pretty high.

The material we are bringing up is part of a massive debris flow that appears to have originated from a flank collapse on the island, which lies about 20 km to our east. The sedimentary layers are constantly switching between close to flat-lying and dips of up to 60 degrees – suggesting that there has been some major deformation during the flow.

We missed the traditional Easter bank holiday celebrations in the UK, and had to make do with sitting in the 30-degree sunshine after digesting some of the spectacular cakes provided by the catering staff (see photo).