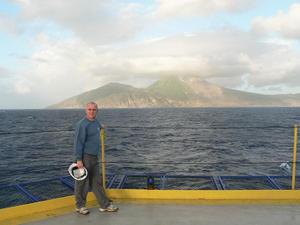 At about 5 o’clock this morning (local time) we finished drilling the final site around Montserrat and are preparing the ship for a 12 hour transit to our next site off the coast of Dominica.

The relatively shallow depths in which we are working mean that cores have been arriving on deck every 45 minutes during some periods. We have also been able to use the advanced piston corer for most of the time, which has meant high recovery rates. Each of the past three sites has also been double-cored to ensure that we get as complete a recovery of the sediments as possible. All of which means that the two core description teams has been working particularly hard over the past ten days. Pete Talling, from NOC, has been leading the midnight to midday core logging shift and has also been providing "Rolf Harris" cartoons (his words!) to keep the science party updated about progress.

Clearly, there will be a lot of work to do on the material before we are able to provide a complete story from the area, but Pete is pretty confident that we have the core available to allow us to address one of the central questions of the cruise; namely, whether the massive debris flows that appear to originate from Montserrat are the result of single collapse events (in which case they could present a significant geohazard), or whether the debris deposits are formed from a number of closely-spaced smaller events. In the case of the latter, the hazard is very much lower.

The last site was on a basement high to the southwest of Montserrat. Preliminary palaeomagnetic data suggest the sediments at the base of the 130 m core are approximately two and a half million years old. Core recovery was essentially 100% and showed numerous volcanic horizons separated by hemipelagic sediments. So, we hope to be able to generate a detailed record of volcanic activity in the region over this period.