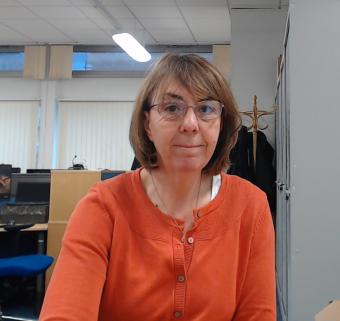 The National Oceanography Centre congratulates Pauline Weatherall who works at NOC in Liverpool on the award of an MBE for services to bathymetry (sea bed mapping) in the 2023 New Year’s Honours List.

Pauline works as the Digital Atlas Manager for the General Bathymetric Chart of the Ocean (GEBCO) which is the definitive map of the seafloor of the global ocean. For over thirty years her work has involved bringing together digital seabed data from across the world and combining it to update and continually improve the world ocean seabed map. GEBCO aims to provide the most authoritative, publicly available bathymetry data sets for the world’s oceans.

More recently, the GEBCO map has become the foundation of the Seabed 2030 project which aims to map the entire world ocean in detail by 2030. The surfaces of the Moon and Mars have been nearly fully mapped in great detail (250m × 250m resolution) from orbiting space craft. However, although it covers 70% of the Earth’s surface, the sea floor has only been mapped at from space at 5km × 5km resolution. To get more detailed seafloor maps needs measurements taken from ships (and in future from robotic surface and underwater vehicles) that are painstakingly pieced together to form the GEBCO map. Presently, less than a quarter of the ocean is mapped at even 1km × 1km resolution and only a tiny fraction in the same detail as Mars or the Moon. We take detailed maps on land for granted but they will become increasingly important for the ocean too – for example as ocean-climate simulation models get more detailed and as efforts to create digital twins of the ocean move forward quickly – this basic foundational data will be essential.

Commenting on her award, Pauline said “It is a reflection of all the excellent work that NOC has provided over the years in support of GEBCO and The Nippon Foundation-GEBCO Seabed 2030 Project and a recognition of their continuing importance.”

Working for the NOC’s British Oceanographic Data Centre (BODC) Pauline has become an internationally recognised expert in bathymetric data and has contributed to many world leading reports, most recently the Intergovernmental Oceanographic Commission of the United Nations Educational, Scientific and Cultural Organization (IOC-UNESCO) pilot “State of the Ocean Report”.

The report outlines the recent success of Seabed 2030, a collaboration between the Nippon Foundation of Japan and GEBCO. It aims to bring together all available bathymetric data to produce the definitive map of the world ocean floor by 2030 and make it available to all. The latest figure now stands at 23.4% mapped to a high resolution, reflecting an increase of 10.1 million square kilometres of new bathymetric data from last year’s figure. This increase is equivalent to an area around the size of Europe; and slightly larger than the Sahara – Earth’s largest hot desert.

Pauline Weatherall, said about this recent success, “At BODC we act as the Global Center for Seabed 2030 and are responsible for assembling and making available GEBCO’s global bathymetric grids.

“We’re proud to work closely with colleagues at the global network of Seabed 2030 Regional Centers and partner organisations to bring together their regional bathymetric compilations into a global, harmonised, data set.”