Amount of seafloor mapped rises to 23.4% 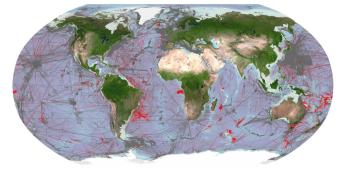 The Nippon Foundation-GEBCO Seabed 2030 Project, an international effort to chart the world’s entire ocean floor, has announced an increase in ocean data equating to the size of Europe.

The latest GEBCO Grid figure now stands at 23.4%, reflecting an increase of 10.1 million square kilometres of new bathymetric data from last year’s figure. This increase is equivalent to an area around the size of Europe; and slightly larger than the Sahara - Earth’s largest hot desert.

Seabed 2030 is a collaborative project between The Nippon Foundation and the General Bathymetric Chart of the Oceans (GEBCO) to inspire the complete mapping of the world's ocean by 2030, and to compile all bathymetric data into the freely available GEBCO Ocean Map.

“We’re proud to work closely with colleagues at the global network of Seabed Regional Centers and partner organisations to bring together their regional bathymetric compilations into a global, harmonised, data set.”

The latest GEBCO global bathymetric model, the GEBCO_2022 Grid, has just been released and is available for direct download either as a global data file or for user-defined geographic regions in a number of export formats through an app developed at BODC: https://download.gebco.net.

GEBCO is a joint programme of the International Hydrographic Organization (IHO) and the Intergovernmental Oceanographic Commission of UNESCO (IOC-UNESCO) and is the only initiative with a mandate to map the entire ocean floor.

Read more about Seabed2030, one of the first Actions officially endorsed as part of the UN Ocean Decade.