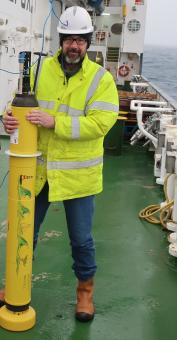 From its extraordinary creatures, to its crucial role in how the ocean takes up and stores carbon, the ocean’s Twilight Zone is a key research focus for scientists around the world.

For this month’s Scientist Spotlight, we spoke to Dr Adrian Martin, from the Marine Systems Modelling group at the NOC, about the world-leading research into this poorly understood layer of the ocean.

What drew you to working in this area?

It has a very appealing combination of being very varied, with huge amounts still unknown, and yet of real significance. The Twilight Zone is important to some of the hottest debates around how we use the oceans, such as deep-sea mining, carbon dioxide removal and fishing.

Like marine science in general, it is also very welcoming, with none of the divisions between disciplines found in some longer-established fields of science. Much of the research involves collaboration between biologists, physicists, chemists, ecologists, computer programmers and technologists, and many researchers become a blend of these themselves. I started as a mathematician yet have been on over 10 expeditions to sea.

What is your role in Twilight Zone research at the NOC?

The NOC is right at the forefront of international research into the Twilight Zone, particularly in addressing the question of how life in the sea helps the ocean store carbon that may otherwise be in the atmosphere. There are many projects looking at different aspects of this across the NOC, from PhD students to multimillion-pound projects involving multiple countries and institutes.

I lead one project called CUSTARD, which is examining how the marine life of the Southern Ocean, a key junction for the “motorways” of the ocean circulation, helps the ocean store carbon. I am also the NOC lead on a European project called SUMMER which is focussed on the fish of the Twilight Zone.

More broadly I lead a programme focussed on the Twilight Zone that is part of the UN Ocean Decade for Sustainable Development. The programme is called JETZON and brings together Twilight Zone researchers and projects from around the world.

What science are you currently working on in relation to the Twilight Zone?

Within CUSTARD we’re currently looking at a question which gives a good example of how this field involves many different approaches. Many people may not know that the ocean has seasons, with the microscopic ocean plants, phytoplankton, waxing and waning over the year like plants on land. In the Southern Ocean this seasonal change is thought to be linked to nutrients, in particular the availability of iron in seawater. There is very little iron in the Southern Ocean so phytoplankton grow rapidly in spring but rapidly exhaust the available iron and subsequently die out. We’re looking into what happens to all the carbon trapped in the phytoplankton. This was originally carbon dioxide and understanding how deep into the ocean this might get before the dead phytoplankton degrade and release the carbon dioxide again can help us understand how the ocean is helping regulate the amount of carbon dioxide in the atmosphere.

What is your favourite thing about the work you do?

The variety and the feeling that almost everything you examine is new territory. Although coined to describe the lack of sunlight found there, the name Twilight Zone acts as an accurate metaphor for how well we understand it.

What impact does your science have on society?

My view is that science progresses best as a community. I can’t claim my research immediately impacts the person in the street but what I research allows other scientists to explore the consequences of perturbing the Twilight Zone (e.g. through deep-sea mining), which in turn allows policy makers, such as governments, to make the difficult decisions that balance the need for new resources against the potential damage to the environment from extracting them. All parts of that community are necessary to achieve a sustainable approach to the ocean.

We are the UK’s leading ocean research charity, and our Twilight Zone experts are at the forefront of research, providing evidence for decision makers. Whether your passion is combating climate change, protecting ocean life, or equipping the next generation, you can have a direct impact by supporting world leading ocean research and innovation.