Late last night the team deployed a CTD and as soon as it had been recovered several hours later, we set to work collecting and analysing the samples. We are looking at the composition of the phytoplankton that lives in surface waters and how they might be influenced by climate change.

These tiny plants are critical to the health of the oceans. Like the plants on land they take up carbon dioxide and use the energy from the sun to photosynthesise. In this way they help remove from the atmosphere the extra carbon dioxide that man has produced, and it is this extra carbon dioxide that we believe is contributing to climate change. Samples were collected to measure how much dissolved inorganic carbon there is in the surface ocean and to see what species of phytoplankton are in the water at the same time. All the samples are preserved for analysis back on land.

The phytoplankton are identified and counted using conventional light microscopes and also by techniques such as flow cytometry and scanning electron microscopy. We are also looking at plant pigment composition. Different classes of phytoplankton have different pigments and so by looking at the ratio of one pigment to another can we see whether there are, for example, diatoms, dinoflagellates or other types of phytoplankton in the water at the time of sampling.

Since phytoplankton are at the bottom of the food chain they provide the food source for the zooplankton and higher marine life and also for seafloor communities. Understanding the quantity and quality of the food that falls to the sea bed is vitally important to the benthic studies that are also being carried out on the cruise. 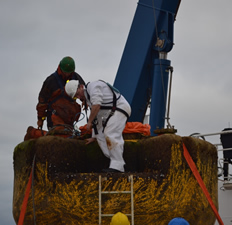 After the CTD recovery, the NMF team deployed a sampling net to around 200 m depth with a 200 µm mesh size suitable for capturing zooplankton. The recovered net yielded a sample which at first glance, appeared to be mostly amphipods. We will use a microscope to identify the species found. Data from a detailed taxonomic analysis will be completed back at base and will contribute to this long term time series.

A major achievement today was the re-launch of the PAP 1 sensor array and ODAS buoy. Once the buoy had been cleaned of its coating of barnacles, a new keel and set of atmospheric sensors was added. The team also added the frame supporting a current meter and sensors to monitor temperature, conductivity, levels of dissolved oxygen, dissolved carbon dioxide, and nitrates, upward and downward irradiance and fluorescence. Despite challenging weather conditions, the NMF team completed the deployment at 2200 hrs. In the darkness the ODAS lights were clearly visible, flashing to indicate its presence to shipping. The sensors are collecting data and transmitting it to shore via satellite, helping us to increase our knowledge and understanding about the ocean. 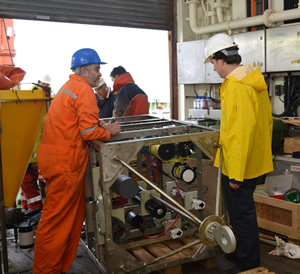 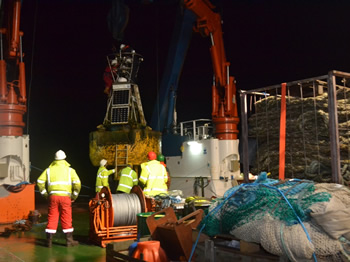