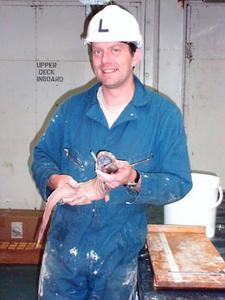 Ahoy, everyone! Today, you are in for a treat. As you know already, we are deploying a whole range of instruments to get an idea about what type of creatures live at about 4,800 metres depth here at the PAP site.

One of these instruments is the Baited Camera Lander. It’s a large steel frame with two high-definition cameras attached to it and, most importantly, a couple of large and very smelly mackerels that serve as bait to attract lots of fish.

Deep-sea fish have adopted several strategies to be able to survive under the extreme conditions characterizing the deep sea. For example, the part of the brain responsible for optical vision is greatly reduced in many of the benthic fish. Rattails, for example, can detect only the blue portion of the visible light spectrum, which allows them to perceive bioluminescence. Overall, however, they rely much more heavily on their olfactory senses compared to shallow-water species. Also, deep-sea fish living on the abyssal plain might reach a very respectable size of more than one metre but they have less muscle and skeletal tissue and contain much more water. Since most of these fish are the top predators in their environment, it means they do not have to escape quickly to avoid being eaten nor do they have to chase their prey since they scavenge on the remains of other dead deep-sea creatures.

In addition to all the fish that have swam passed the Lander so far, it has also captured a variety of other animals during its last deployment. For example, long-legged pycnogonids, or sea spiders, appear regularly on our time-lapse videos and cameras. They are not true spiders but belong to the arthropods, which also include insects. They are an extremely diverse group and occur in both shallow and deep waters. The deep-sea representatives prefer the cold waters of the Arctic and Antarctic but can be found everywhere. They range in size from a few millimetres up to 90 cm in some deep- water species.

The two other animals you can see in the pictures are a penaid shrimp and an amphipod. Amphipods are shrimp-like creatures that are usually only a few centimetres long but can reach 10 to 25 cm in the deep sea (e.g., Eurythenes gryllus; see previous blog). They are extremely efficient scavengers as the picture of the stripped mackerel carcasses illustrates (courtesy of T. Horton). We should all be thankful that they don’t reach the size of whales!

Most of the species that are captured by the Lander are restricted to living at the deep seafloor. In fact, they only survive at great depths, which prevents scientists from bringing them up to the surface alive and study them in the laboratory. A lot of the deep-sea creatures are therefore among the most elusive animals on Earth, which makes the trawls that are carried out on our cruise such an exciting event. We hope you will enjoy the exclusive photographs from the second Lander deployment (courtesy of Alan Jamieson). These pictures are only a few days old and their protagonists are roaming the abyssal plain at this very moment...