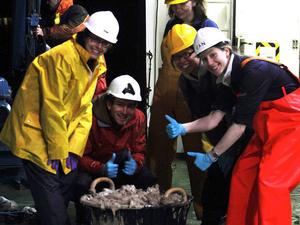 The days when we take the trawl samples seem to be a somewhat confusing mixture of sleeplessness, excitement and a lot of hard work! For me, these trawls are really the reason I’ve been out here for the last two weeks as I gather samples of abyssal fish for my PhD.

Although I’m still quite early on in my studies, the major aim of my project is to investigate some of the different natural and anthropogenic factors that drive changes in fish populations and behaviour in deep-sea environments.

The Porcupine Abyssal Plain site is too deep to be exploited directly by humans at present, but there is increasing evidence that changes in the surface waters can lead to significant changes in communities at the deep seafloor. However, because of the difficulties involved in obtaining samples from the abyss, and the relatively low abundance of fish at those depths, relatively little is known about the ecology and behaviour of the fish species living in these environments. 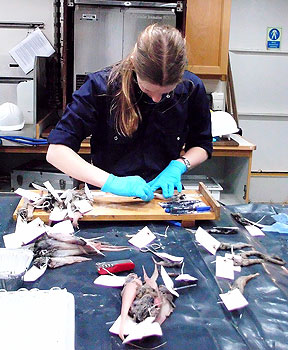 My aims for this cruise then are to collect all the fish specimens that are captured in the trawls and record their identities and biometric data to add to the long-term dataset that has been recorded since the mid-1980s. Additionally, I am collecting muscle samples and stomachs from the demersal species which I will examine once I’m back at Glasgow University and which will hopefully be able to provide new information on what the different fish species are feeding on and in what quantities. While the stomach contents data will show exactly what each fish has recently been feeding on, it is very much a snapshot measure, and they are notoriously difficult to collect from deep-water animals since the massive changes in pressure experienced during trawling often result in the stomachs being empty by the time the fish reach the surface. The stable isotope data can’t provide such precise feeding data, but can be used to estimate the trophic level at which each fish has been feeding over a longer time period and an estimate of the types of food being consumed. Once I have a better understanding of how these fish are feeding within the abyssal community, I hope to be able to investigate how changes in food availability and energy input from the surface waters may affect the fish community in the PAP. 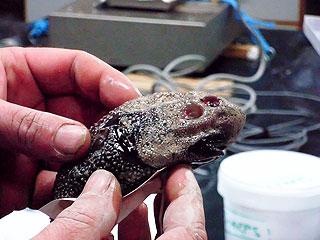 In addition to these tissue samples, I’m also collecting otoliths. These are small ‘bones’ that are found in the skulls of fish and which are laid down over the course of an individual’s lifetime, much like the rings of a tree. This means that in addition to providing an estimate of the age of individual fish, any chemicals (or stable isotopes) in the water that a fish is exposed to may be recorded on the surface of the otolith, which if analysed correctly, can be used to make some estimates about the life history of that individual, such as the depth at which it has lived during different periods of its life, or exposure to pollutants. All these measures taken together can be used to produce an estimate of how these animals live their lives in the abyss. 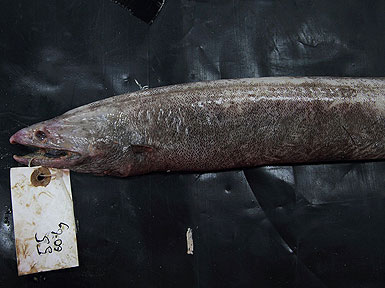 So those are my aims at least! So far we’ve completed two trawls and collected 80 specimens of fish, some of which have been wonderfully weird! Since this is the first deep-sea cruise I’ve been on, this has been my first opportunity to see these animals in the flesh and they are fascinating creatures, very different from the coastal fish I am used to seeing. The majority of the species collected so far have been grenadiers, which are a very common group in the deep-sea, but we have also captured a few more unusual specimens including a large, pink cusk eel and a pelagic fangtooth! With a bit of luck, we’ll be doing one more trawl while we’re out here, so we’ll be keeping our fingers crossed for lots more fish to come!