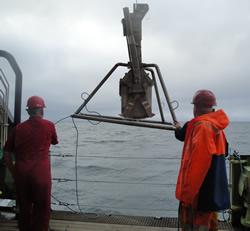 The deep sea is a reservoir of unknown biodiversity, particularly among invertebrates living inside the mud with many species new to science and in many ways rivalling the discovery of new insect species in rainforests.

Taxonomy is a branch of science that deals with the description and identification of species, as well as working out the relationships among them. The objective of the team from Natural History Museum in London (Claire Laguionie Marchais, PhD student, and Lenka Neal, research assistant, led by Dr Gordon Paterson) on this cruise is to collect samples of invertebrate macrofauna (animals large enough to remain on a 300 micron mesh sieve). The animals in this size class span between those that are visible to the naked eye and those that are usually only visible by microscope.

In the past animals were only preserved in formalin and used solely for morphological identification. Some species of polychaetes worms (or bristle worms), which form an abundant part of the macrofauna in the deep sea, are currently being described based on their morphology but the formalin preserved samples are often not suitable for DNA extraction. In the last decade DNA taxonomy, also known as barcoding, has become an indispensable tool to taxonomists as differences in DNA sequences can be used to distinguish between different species.

On this cruise some of the samples obtained from coring and trawling will be preserved in absolute ethanol to allow for successful DNA extraction. Based on morphological examinations we have discovered identical species in different ocean basins from locations as far apart as the Porcupine Abyssal Plain in NE Atlantic, the Pacific and Indian Ocean, as well as the seas around Antarctica. But what will the DNA tell us? Another piece in the puzzle and hopefully soon another deep-sea mystery solved. The sense of discovery and adventure in what makes deep-sea biology so exciting and so addictive!!! 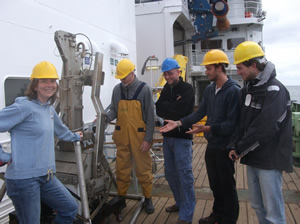 The abyssal seafloor is pervasive, but hardly known. It takes an incredible amount of time, effort and expertise to do a research cruise such as this one. So, it is not surprising that scientists have tended to explore new places rather than going back to previously sampled sites. Only the Porcupine Abyssal Plain in the North East Atlantic Ocean and Station M in the North East Pacific have been visited (as regularly as possible) since 1989. It gives two unique sets of temporal data that are priceless regarding the need to assess our potential impact such environments, in particular due to global warming. The abyss may seem far away from human impact but results from both abyssal stations have shown that changes in surface climate appear to link to seafloor conditions on seasonal and annual time scales. 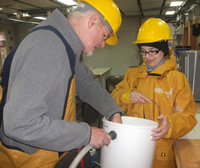 I am very lucky to work on both the PAP site and Station M, looking at temporal variation in populations of polychaetes. They are tiny creatures that live on or in the seafloor. Like earthworms, they provide essential functions within the ecosystem by digging into the seafloor and eating organic matter. By spending hours on my microscope, I look at how worm abundances and species composition change over time. I then try to relate changes in worm populations to environmental variables such as climate data or the quantity of organic matter produced in surface waters, or the presence of other animals. I also explore how the changes in abundance and composition influence carbon processing at the seafloor. Ultimately, this work and works done by other deep-sea marine biologists on other abyssal animals, will help to better characterise the carbon fate in the abyss and will be used to inform ocean management in the future.

I have waited more than twenty years to be part of such an expedition and it is a real delight to be at sea and learn how specimens that end up under my microscope are collected! It is also one of these rare moments when you are disconnected from hectic modern life. And as the cherry on top of the cake, the crew members are really great and happy to share their knowledge with us (from the sailing to the cake recipes).