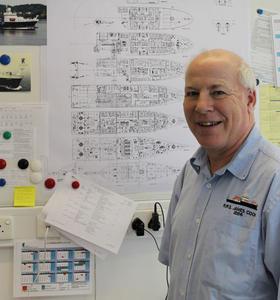 The National Oceanography Centre’s project officer for both RRS Discovery and James Cook, Edward Cooper, has been awarded an MBE for services to marine science. The announcement was made in the Queen’s birthday honours list this month.

For the past 35 years Edward’s work has revolved around NERC ships. Initially working as a sea-going technician supporting research ships in 1979, Ed progressed through the ranks to become project officer of NOC’s two latest research ships.

As project officer, Ed has coordinated and overseen every detail of the building of RRS James Cook and RRS Discovery – from inception to final delivery of both ships. It took four years for the RRS James Cook to be built, from inception to delivery in 2006, and seven years for RRS Discovery, delivered last year. It is the culmination of this work which has earned Ed the honour of becoming a Member of the Order of the British Empire (MBE).

Ed said “I felt stunned when I opened the letter from the Cabinet Office as before reading it I’d thought it was an invitation to a meeting about project management. Luckily it was something more exciting.”

“However it’s not just me but the whole team of people who contributed to the building and delivery of the ships. I am very grateful for their hard work and support over the years.”

Director of NOC’s National Marine Facilities, Geraint West, said “The success of both the RRS James Cook and RRS Discovery build projects is largely down to Ed’s diligence, dogged determination and attention to detail. The UK marine science community owes him a huge debt of gratitude for the work he has put into helping make these two incredibly capable vessels a reality, and consequently his MBE is thoroughly deserved.”

Ed said he has never seen his role purely as a job, more like an extended hobby as he has always enjoyed involvement with the vessel activities.

The highlights of Ed’s career so far have been getting the ships to the point of performing the roles for which they were intended – carrying out scientific research – and the launch of RRS Discovery and the two naming ceremonies.

The MBE will be presented to Edward in the autumn.