This issue of the blog is written by Laura Bretherton, from the University of Essex, who is studying whether ocean acidification affects photosynthesis.

Today we continued our sampling of the aftermath of a very large coccolithophore bloom. We carried out another transect across the bright waters (see photo), approaching fairly close to Norway at our most northerly point.

The last two days have been quite gruelling because we have been stopping more often to collect water with the CTD and also making more frequent measurements from the ‘underway supply’, a pipe that collects water continuously as the ship is steaming along. This allows us to measure the local seawater without stopping the ship. 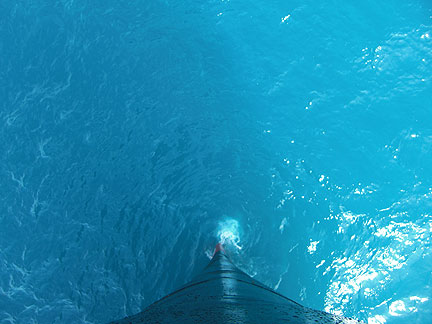 As we have heard in previous entries, plankton can affect our climate and participate in the cycling of nutrients, but they are also the marine world’s primary producers, the sea’s equivalent of our land based plants. Using sunlight, they turn carbon dioxide into organic carbon-containing compounds like sugars. This process is called carbon fixation, and is what makes phytoplankton so vital to life in the ocean.

As Alex explained in his blog two days ago, we can analyse carbon fixation in phytoplankton by using a radioactive form of carbon, carbon-14 (C14). Samples from natural seawater (or the bioassays) are divided up into 12 small bottles, and each one has C14 added. The bottles are stacked into a column and put into an incubator, which shines light through the bottles. Each bottle experiences a different, known, amount of light. Left for a few hours, the phytoplankton begin to fix carbon, some of which will be the radioactive C14. Each small bottle is then filtered, and those filters exposed to hydrochloric acid. The acid gets rid of any C14 on the filter by turning it to CO2 gas, but all the C14 that has been fixed by the plankton is safely inside the cells, out of contact with the acid, and so remains on the filter. The filters are placed inside small vials, to which a scintillation cocktail is added – a chemical that turns radiation into light. Finally, the vials are loaded into a scintillation counter, which counts the photons of light given off by the vials. Then, using a set of equations, this can be converted into the amount of carbon fixed by each phytoplankton cell.

From this information, we can create light response curves by plotting the amount of carbon fixed against the light levels. A light response curve has a very characteristic shape, with a very rapid increase in carbon fixation at lower light levels and a plateau at high levels, due to light saturation. Light saturation is when the phytoplankton receive so much light that they can’t benefit from any extra. Light response curves can give us an idea of the physiology of the phytoplankton in the original sample. They can tell us how efficiently light is used to fix carbon and what their maximum capacity is for fixing carbon. The light level at which they become saturated tells us whether or not the plankton are adapted to thrive in shallow, high light environments, or if they are better adapted to live deeper in the water column where light is not so bright.

What is interesting is how carbon fixation and primary productivity will change in response to ocean acidification (OA). OA will result in there being more CO2 in seawater, which could stimulate primary productivity. More carbon should induce more carbon fixation, one might think. This view is bolstered by the fact that the enzyme that does the carbon fixing, called Rubisco, is pretty bad at its job. It can’t attract carbon dioxide to itself very well. Logically, if the concentration of CO2 in seawater increased, this should matter less, and the rate of carbon fixation should increase.

But it’s more complicated than that. Some groups of phytoplankton evolved means of overcoming the limitations of Rubisco, called carbon concentrating mechanisms (CCMs). We might expect that those phytoplankton that employ CCMs to concentrate the carbon for Rubisco, care less about whether it’s more scarce or more available in the environment. Indeed, that is what is found, and some species have shown no response to CO2 level in their photosynthetic rate in lab experiments, indicating that their CCMs are doing a good job at keeping Rubisco saturated with carbon regardless of the carbon levels outside the cells.

Groups of plankton that didn’t evolve CCMs do show an increase in photosynthetic rates when exposed to higher CO2 levels, so could OA give them an advantage? Plankton that spend a lot of energy on CCMs presumably divert that precious energy away from other things they could spend it on, such as reproduction or anti-predator defences. Does this mean that phytoplankton which never had CCMS will come to be more successful in a high CO2 world, because CCMs are no longer so useful?

Questions like these make it apparent that OA will not affect all phytoplankton in the same way, and has the potential to change the kinds of species we find in the plankton community. This leads to more questions, like how this will change aspects of nutrient and climatological cycles, or affect marine food webs and ecosystems. Hopefully, the research taking place on this cruise can contribute to uncovering these answers, and allow us to understand more fully how we are altering our oceans.