Success! The strategy of moving as quickly as possible to the west turned out to be a good one. Although the rolling seas seemed to go on and on, eventually by this morning the sea was more tranquil and we were able to lower the CTD.

The next two blog entries are by Sophie Richier from the National Oceanography Centre Southampton, who carries out one of the more important roles.

We collected water for the fifth and last bioassay and it was a good feeling to get this accomplished. If we’d been delayed by another day we might not have had time to finish this last bioassay (we keep them in the container for 4 days and then some measurements take another 2 days at the end).

Now we are heading northwards again, to rejoin our planned cruise track off the west coast of Norway.

I guess this is what it feels like when we are approaching the end of a good cruise: too much work, not nearly enough sleep but a lot of satisfaction!

We are only a few days from the end and really close to what was planned initially in terms of the bioassays. The fifth bioassay, in the North Sea, was finally set up almost a week before the end, giving us enough time to incubate them for four days at higher pCO2. It seems anyway that it was not challenging enough for us because we have also carried out a few more on the side but in smaller bottles this time (1L and 500 mL). These “mini ones” compare the effects of ocean acidification in nutrient-rich and nutrient-scarce conditions, but also focus on the early response to increasing pCO2, starting from incubations for only 1 hour.

My role on this cruise was mainly to make sure that everything related to the bioassays went smoothly and it actually did. I really appreciated and enjoyed the common effort built around the whole experiment. Each of us contributed their own effort and expertise, so that together we were able to carry out the initial work plan that will provide answers to our scientific questions. 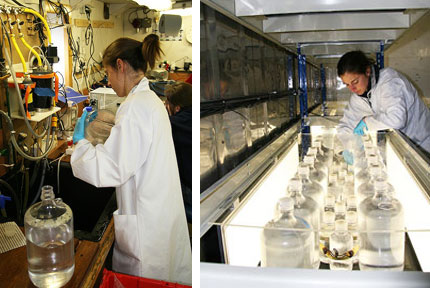 I am known as the “bottle cleaner” on the ship, which is really true (up to 82 bottles waiting to be cleaned after each bioassay break down). Fortunately I had some precious help from Toby and especially Dave with whom we perfected a protocol for cleaning efficiency! Less than 1 minute per bottle including an acid wash step and 3 pure water rinses before enclosing each shiny 4.5 litre plastic bottle in a clean and transparent plastic bag.