Yesterday evening and today we have enjoyed sunny weather and calm seas, as shown in the photos. Those who were feeling a bit queasy earlier in the trip are now feeling much better. However, we are forecast to be heading into rough weather later in the week, when we will be visiting the most southerly weather forecast areas, Fitzroy and Biscay.

As ever, we have had our accompaniment of seabirds. When we were quite far out to the west of Ireland, on the Atlantic side, we were followed by a variety of birds but most noticeably large gannets. Presumably they mistook us for a trawler and were on the lookout for discarded fish scraps. However, the ship that we are on, run by the Natural Environment Research Council of the UK, has a rule against disposing of any rubbish into the sea, so they were out of luck. Today, in the Irish Sea to the east of Ireland, we saw fewer gannets and more seagulls. Some of them decided to take advantage of a free perch, as shown in the photo, and stopped for a rest near the bow of the ship (this photo, as most others in the blog, was taken by Sebastian Hennige). 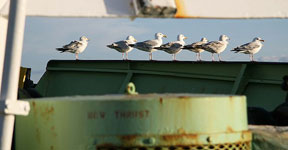 At 2am this morning, those of us involved in setting up the bioassays dragged ourselves out onto the deck in the pre-dawn murky light. As described in the blog entry for the 8th of June, we collected seawater to start off another bioassay experiment, which will run over the next four days. 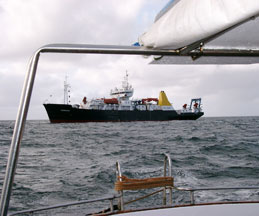 In contrast to the site near the Outer Hebrides (for the first bioassay) which contained large numbers of coccolithophore phytoplankton, today the point in the sea from where we took the seawater had different phytoplankton living in it (phytoplankton are the open sea’s equivalent of plants on land or seaweeds on the seashore; unlike their plant equivalents elsewhere they are microscopic in size). Diatoms are similar to coccolithophores in that both build transparent mineral shells, but diatoms are different in that the material they use for their shells is opal, rather than calcium carbonate. The tendency of opal to dissolve is not affected by ocean acidity, unlike calcium carbonate, and so diatoms could be unaffected by or could actually benefit from ocean acidification. Another, more easily noticeable difference to the marine life was that there were large numbers of jellyfish visible just beneath the surface under the ship’s bright floodlights. 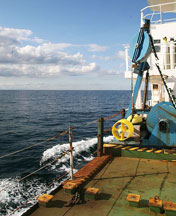 After the collection of water for the bioassays we then carried out a CTD station this afternoon in the Celtic Sea and are now steaming southwards to round Land’s End, the southwestern tip of England, ready to enter the English Channel for the first time and arrive south of Plymouth for another CTD station at 4am tomorrow morning. 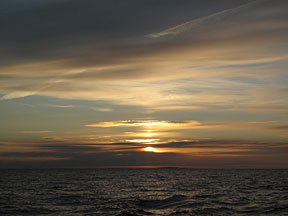