We will return to yesterday’s theme – carbon chemistry of seawater – tomorrow, but today’s blog is about pteropods.

The exciting event today was a chance finding of pteropods in one of the CTD water sampling bottles. When we were filtering the seawater (straining it through an extremely fine mesh to see what microscopic particles it contains), one of the filters looked distinctly odd (see photo). It looked as if pepper had been sprinkled on it. Luckily one of the biologists on board, Jeremy Young, has brought a microscope and was able to quickly look at the filter paper; under the microscope (see photo) it was clear that the apparent specks of pepper were in fact juvenile pteropods.

Pteropods are strange looking marine creatures (see image); they are swimming snails (they are distant relatives of garden snails, both are gastropods). Like snails on land, they build mineral shells out of calcium carbonate. But in their case they swim around in them instead of slide around in them.

A most concerning side-effect of ocean acidification is that it makes seawater more corrosive to calcium carbonate. It is thought that this could cause particular problems for pteropods because they use a more easily dissolvable form of calcium carbonate called aragonite.

We therefore took advantage of this chance encounter to perform an additional experiment. We started a special small bioassay experiment just for the pteropods; we put them in bottles, manipulated the CO2 to different levels, and then put the bottles into the bioassay container. After some days we will take them out and preserve them so that the state of their shells can be examined back on land, to see if the shells vary (if any of them have partly dissolved) as a function of the CO2 level. This will run in parallel with the normal bioassay experiments described several days ago. 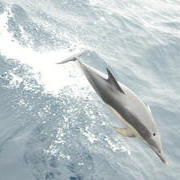 Another highlight today was a sighting of dolphins next to the ship (see final photo). A lowlight was a malfunction of the winch that lowers and raises the CTD. This was quite concerning. If this was to fail altogether then it would jeopardise most of the science on board. However, it was fixed in an hour or so, and we were able to continue.

More generally, today was a long day again, with two CTD stations and also a whole set of measurements as we brought the first bioassay experiment (the one that started on Wednesday) to an end. Much data has already been collected but tiredness is beginning to set in for some of us. Tomorrow we have a less hectic schedule which should allow partial recuperation, in time for the beginning of the second bioassay experiment on Tuesday.