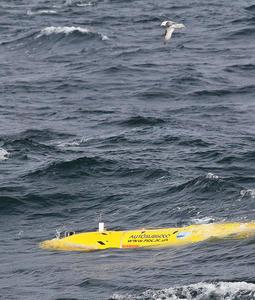 Two projects investigating the use of robot submarines to map and monitor the seas around the United Kingdom – collecting data that will inform future government policy on the protection of the marine environment – have received £720,000 in funding.

The research programmes, led by the UK’s National Oceanography Centre (NOC) have been contracted by the Department for the Environment, Food and Rural Affairs (Defra). The project will focus on the use and capabilities of the country’s autonomous underwater vehicle (AUV) and sea glider fleet. It will generate data that will guide the future use of these submersibles to investigate the marine environment.

NOC, which is owned by the Natural Environment Research Council, recently launched the MARS facility – Marine Autonomous and Robotic Systems – the UK’s principal provider of AUVs and gliders for the wider marine science community.

The first project is entitled ‘Investigating the feasibility of utilising AUV and glider technology for mapping and monitoring of the UK MPA network’. This £370,000 project runs from March to September 2013 and is funded as part of the Defra Marine Biodiversity Research and Development programme.

The primary aim is to review the capacity and capabilities of the UK AUV and glider fleet, and provide case studies illustrating how data collected with these instruments can be used to support policy requirements, such as mapping and monitoring of Marine Protected Areas (MPAs). It is led by NOC in partnership with British Geological Survey (BGS) and Scottish Association for Marine Science (SAMS).

The second project – ‘Novel AUV and glider deployments to inform future MPA and MSFD monitoring strategy in UK shelf waters’ – will begin in late 2012 with fieldwork in 2013 and 2014. This £350,000 project is funded as part of the Defra Strategic Evidence and Partnerships Fund (SEPF) and will support new AUV and glider data collection in UK waters in 2013 and 2014. It will ensure that innovative science undertaken within NERC National Capability and Research Programmes will have maximum impact for policy drivers such as the Marine Strategy Framework Directive (MSFD).

Both projects are led by Dr Russell Wynn, Head of Marine Geoscience at NOC and a co-ordinator of the UK Marine Environmental Mapping Programme (MAREMAP). Dr Wynn said “These projects highlight the increased level of collaboration in marine mapping activities across UK Government. NOC and our MAREMAP partners have world-leading expertise in the development and application of AUV and glider technology, and we are pleased to be able to apply this expertise to important policy issues such as mapping and monitoring of the forthcoming UK Marine Protected Area network.”

Dr Wynn and Dr Brian Bett, also of NOC, recently attended a Defra marine science open day in London where initial project results were presented to senior Defra staff. Dr Wynn said “There is considerable interest from policy-makers in these two projects, particularly as AUV and glider technology may help the UK Government reduce the cost of its statutory marine monitoring obligations. They also recognise that these instruments can generate data of higher quality and in more hostile environments than is possible with ship-based surveys.”