Research expedition will assess the recovery of Scottish coral reef 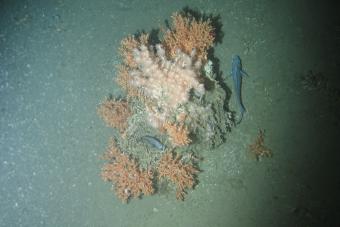 On Friday 6 September a team of scientists and engineers, led by the National Oceanography Centre (NOC) and University of Southampton, will set sail to revisit a deep, cold-water coral reef area 16 years after it was named a Marine Protected Area, to look for evidence the coral is regenerating.

These 1000-metre deep coral reefs were discovered in 1998 off the coast of north-west Scotland by NOC scientists, who named the area the ‘Darwin Mounds’ after their research ship, RRS Charles Darwin.

Cold-water corals build reefs that are important habitats for a wide range of other species, including commercially important fish. The reefs are fragile, and can easily be damaged by the heavy gear of deep-sea bottom trawlers. Much of the coral at the Darwin Mounds was destroyed by trawling, leading to the site being given Marine Protected Area status in 2003.

The team returned to the site in 2011 and found that deep, cold-water corals are very slow to recover from damage. This finding suggested that deep-water Marine Protected Areas protect vulnerable marine ecosystems most effectively when they are put in place before that damage occurs.

This latest expedition, on board the RRS Discovery aims to answer the question ‘how long does cold water coral take to recover?’ by returning to the site once more, using marine robots to look for signs the coral has regrown. The results will help inform the use of Marine Protected Areas, which were recently given an extra £7 Million by the UK government.

This will be achieved by comparing surveys of the site from 2000 and 2011, with those conducted on this expedition. The surveys use some of the newest marine survey technology, including the NOC’s robot-sub, Autosub6000, to map the area, and the HyBIS Robotic Underwater Vehicle to collect high-definition video footage.

Dr Veerle Huvenne, who will act as expedition chief scientist, said: “I’m very excited to go back to the Darwin Mounds, which we last visited eight years ago. I really hope we will find evidence of coral recovery.

“Long-term repeat surveys in the deep sea are very rare, which means we know very little about how habitats and ecosystems evolve over time, be it in a natural or human-impacted state. Our expedition to the Darwin Mounds will bring back new insights, no matter what we find.”

These surveys will be conducted as part of the Climate Linked Atlantic Sector Science (CLASS) programme, which aims to assess how the ocean will evolve as a result of climate change and the intensified of human exploitation of the ocean. The expedition will also take collaborators from the Joint Nature Conservation Committee, University of Edinburgh and Scottish Association of Marine Science.

The team will also be deploying a new 3D imaging system integrated on Autosub6000 that can create a 100-hectare 3D map of the coral reefs in 24 hours, which will be a record if the trials are successful. This technology is being developed by the University of Southampton in collaboration with the NOC as part of the BioCam project, part of the Natural Environment Research Council (NERC) OCEANIDS program, and will help to efficiently map out the extent of living and dead coral within the reefs.

Dr Blair Thornton from The University of Southampton, who is the BioCam principal investigator and expedition co-chief scientist, said: “We are excited to deploy our technology and generate high-resolution 3D visual reconstructions of cold-water coral in UK MPAs.”

Dr Thornton’s team plan to do more than just collect data while out at sea.

“Our plan is generate 100-hectare scale maps with millimetre-order resolution for scientists to visualise and explore while we are still out at sea.”

“We will also use machine learning algorithms to automatically interpret the data and help scientists understand the broader-scale spatial patterns that have been observed.”

“Our goal is to maximise understanding of the observations within expedition relevant timeframes. Hopefully this will allow our teams to make the best informed decisions while we are all still out at sea and improve the quality of information we gather from this expedition.”