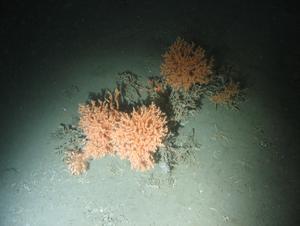 A unique study recently published by scientists from the National Oceanography Centre (NOC) and University College Cork shows that deep, cold-water corals are very slow to recover from damage. Therefore deep-water Marine Protected Areas (MPAs) protect vulnerable marine ecosystems most effectively when they are put in place before that damage occurs.

This study used data from deep-water robots to compare a section of the northern Rockall Trough, off North West Scotland, before and after an MPA was set up. The coral populations remained stable in areas that had not been impacted by trawling before the area was closed to all bottom contact fisheries. However, the amount of live coral dropped dramatically in the parts of the MPA that had sustained previous damage, with hardly any live coral being found during the follow-up survey. Despite eight years of protection there were very few indications of new coral growth. Some deep-sea species grow slowly and do not recover from impacts quickly or easily.

Dr Veerle Huvenne from the NOC, the lead author of this research paper, said “These findings are a really good example of how the NOC’s technology and scientific expertise can help inform the management of marine protected areas to get the best possible outcome.”

Unlike their tropical cousins, cold-water corals do not need sunlight because they do not live in symbiosis with micro-algae. Instead, they capture their food from the water as it passes by. This means they can live in much colder and deeper waters. In 1998 a team of NOC scientists from Marine Geoscience and Ocean Biogeochemistry & Ecosystems discovered the ‘Darwin Mounds’ area and its rather unique coral growths, and named the site the ‘Darwin Mounds’ after their research ship RRS Charles Darwin. Cold-water corals build reefs that are important habitats for a wide range of other species, including commercially important fish. The reefs are fragile, and can easily be damaged by the heavy gear of deep-sea bottom trawlers.

Co-author Dr Brian Bett from the NOC recalls seeing the first images of the corals back in 1998; “It was a surprise – we were expecting mud volcanoes. The little mounds on the seabed were topped with live coral colonies. Our initial observations, made with towed video cameras and echo-sounders, also showed that extensive damage to the corals had already been caused by bottom trawling.”

The comparison that forms the basis of this study was made by returning to the MPA, eight years after it was set up in 2003, using some of the newest marine survey technology, including NOC’s robot-sub, Autosub6000, to map the area, and a Remotely Operated Vehicle to collect high-definition video footage.