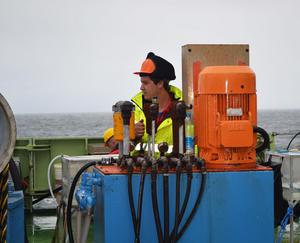 This morning the technical team used an acoustic release system to free the sediment traps that were deployed at the PAP site from the research vessel Celtic Explorer in September 2010. Principal Scientist Henry Ruhl and Marine Technician Corinne Pebody watched from the bridge until the PAP 3 buoys, on the traps, were spotted.

The Cook then manoeuvred along-side so that we could winch them aboard. After the traps were recovered, the pH of the samples was tested as the first part of the analysis process.

The traps have been collecting particulate material sinking from the surface ocean into the deep sea. One of the traps was stationed at 3,000 m deep to collect flux exported from the euphotic zone and another was closer to the seabed at 100 metres above bottom, to collect the material nearer to the seabed. 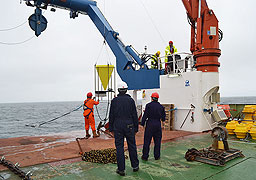 The traps rotated more than a dozen bottles under the collecting cone and recorded a time sequence of flux throughout the year. This has given us a picture of the seasonal changes that occur, even in the deep sea. We have maintained the traps at the PAP-Sustained Observation (SO) site for a number of years and this has enabled us to build a record of change over decades. The capture of this flux provides material that can be analysed in a variety of ways to build up a complex picture of carbon, silica and nitrogen sequestration. 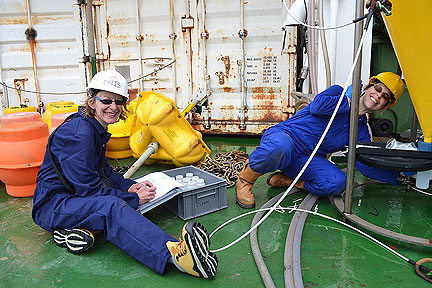 After the traps that were deployed last year were recovered, a new set was put in place for the upcoming year.

The Cook is now heading towards our next station across a calm sea where we will soon deploy a seafloor photography system.