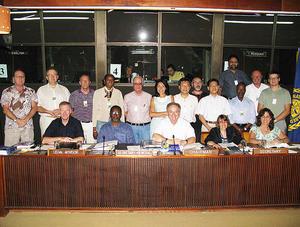 At the 17th Session of the UN International Seabed Authority (ISA; 12–22 July 2011) in Kingston, Jamaica, Dr David Billett of the National Oceanography Centre was elected as Chairman of the Legal and Technical Commission (LTC).

The International Seabed Authority regulates the exploitation of mineral resources in areas beyond national jurisdiction (otherwise known in UN circles as ‘The Area’). The mineral resources include polymetallic nodules lying on abyssal plain muds in the equatorial Pacific and Indian oceans. These mineral nodules are composed of a combination of commercially valuable metals such as cobalt, zinc, nickel, gold and silver, as well as iron and manganese.

In addition, polymetallic sulphides and cobalt-rich ferro-manganese crusts are found on mid ocean ridges and seamounts, respectively. New rare earth element (REE) muds have also been discovered by Ocean Drilling Project coring. These so-called ‘spice metals’ have a variety of industrial uses, including use in electronics components, advanced materials and as chemical catalysts.

The LTC is a group of around 25 experts in law, geology and environmental sciences. It makes recommendations to the ISA Council for activities in The Area, including resource evaluation and environmental protection.

Dr Billett is a marine biologist with expertise in the application of deep-sea science to industry and international policy needs. Reflecting on his appointment, he said “It is a great privilege to be elected Chairman of the Legal and Technical Commission. Advances in technology are opening up large areas of the deep sea for commercial mineral mining, and it is important that this is responsibly and sustainably managed.”

For some time China, Japan, Russia, France, Germany, India, Korea and Eastern European states have been studying the possibility of mining polymetallic nodules. This year, applications have been made by Nauru and Tonga with possible commercial backing, which may be a ‘game changer’ in the development of nodule resources. In addition, China and Russia have submitted applications to explore for polymetallic sulphides on the South-West Indian Ridge and the Mid Atlantic Ridge, respectively, covering ridge segments potentially 1,000 by 300 kilometres in extent.

For polymetallic nodules, there have been guidelines for the scientific research required to make a convincing environmental impact assessment. Similar guidelines are being produced this year for polymetallic sulphides and cobalt crusts. These guidelines are being based on scientific advice provided by the Census of Marine Life, in particular the Chemosynthetic Ecosystems (ChEss) project, led by Professor Paul Tyler and Dr Maria Baker at NOC, and the Continental Margin Ecosystems (COMARGE) project.

In addition, a regional environmental management plan for the Pacific nodule province was recommended this year based on research that the Deep Seas Group at NOC contributed to.