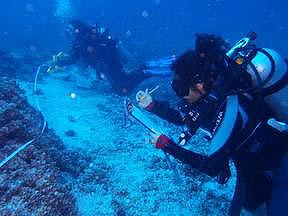 Increasing tourism and the spread of marine invasive non-native species is threatening the unique plant and marine life around the Galapagos Islands. UK scientists from the Universities of Southampton and Dundee are currently investigating the extent of the problem following a grant from the UK Government’s Darwin Initiative, which aims to protect biodiversity and promote sustainability around the world.

UK Environment Minister Richard Benyon said “The UK has played a major role in supporting the establishment of the Galapagos Marine Reserve and our Darwin Initiative has funded a range of important projects protecting and enhancing both marine and terrestrial wildlife. Invasive non-native species can cause huge damage to local ecosystems and I am delighted that action is being taken to monitor this threat.”

Ken will discuss issues concerning white corals and lion fish and the impacts of tourism on invasive species.

A familiar face for regular attendees of the series, Dr Ken Collins co-founded the Marine Life Talks (together with Jenny Mallinson) in 2000 and during his 10 years in charge he organised an impressive 125 talks. In February Ken embarked on his 6th visit to the Galapagos. In this talk he will report on his recent findings on the islands and results from the marine invasives project.

Recordings of previous Marine Life Talks can be found on http://www.youtube.com/user/NOCSnews.

The next Marine Life Talk at the National Oceanography Centre: 4 July 2013 – On Gaia: A Critical Investigation of the relationship between Life and Earth – Dr Toby Tyrrell