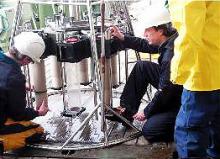 So far we have had remarkably benevolent weather and yesterday I caught the sun a little as I was on deck filming most of the day, so today I started by putting sun screen on! It has been needed too as I have spent a good deal of today on deck filming.

Firstly I filmed the megacorer team removing the sediment cores from the megacorer. I was told that some of the sediments were laid down 14,000 years ago! Later in the morning I was able to help with the processing as they slice the cores into sections and place them in plastic containers to be analysed for the creatures living in the sediments.